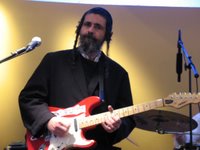 Being that I am an amateur musician, one of the things that I do when I go to a wedding is to check out the band. The last wedding that I was at had a really good band, particularly the guitar player. He caught my attention immediately, not because of his long black frock and side-curls to match, but because he was playing at a level that was a few leagues above your average wedding band. He was wailing away, bending the strings to the limit, and moving up and down the neck with blinding speed. I got a chuckle out of the guy by telling him that he is "Jimi Hendrix with peot."

Someone told me that is name is Dani Maman, and that he is a ba'al teshuva. After a few Google searches, I learned that he used to be a member of a "mythological" Israeli rock band that was called "Gan Eden". Afterwards he spent some time in Germany, playing in different bands. He returned to Israel, played with "Gan Eden" again but left the group after he returned to his Jewish roots.

During the meal Maman played the opening licks to "Hey Joe" and I thought to myself that singing "Hey Joe, where ya' goin' with that gun in your hand?" wasn't exactly fitting for a wedding. Never fear, he changed the words to "Ani Ma'amin Be'Emunah Shleima Be'viat HaMashiach"(I believe with a complete faith in the coming of the Messiah)! The crowd loved it. He also played an instrumental version of "Hotel California".

I think that Dani is an example of the proper way for one to do teshuvah. He didn't throw the baby out with the dirty bath water. Becoming orthodox did not mean putting down his guitar (except on Shabbat, of course). Dani is using his great talent, and channeling it to avenues of holiness. Chazak U'varuch!
Posted by Cosmic X at 3:22 PM

i heard him tonight in new york.
he's an incredible guitarist