Haveil Havalim #287 - the "There's a First Time for Everybody" Edition

Welcome to Haveil Havalim. This week's edition is the 287th which I nicknamed "There's a First Time for Everybody Edition". This blog has been around for almost six years, and I'm a little bit embarrassed to say that this is the first time that I'm hosting "Haveil Havalim". I guess I was concerned that it would be a lot of work, consuming time that I really have a shortage of. It turns out that it was not such a big deal. Really.

Founded by Soccer Dad, one of the founding fathers of the jblogosphere, Haveil Havalim is a carnival of Jewish blogs - a weekly collection of Jewish and Israeli blog highlights collected from blogs all around the world. It's hosted by different bloggers each week. It is now managed by Jack, who will be ecstatic if you'll agree to host the carnival on your blog.

Enough of the official mumbo jumbo. Let's get going!

Batya from the Biblical town of Shilo gives us a chance to win a free cookbook. But what happens to all of the delicious food that you prepared when there is a power outage just before Shabbat? Getting drunk will not help!

Cosmic X (that's me) has a series of posts about the book, "Torat HaMelech". He also blogged about Rechavam Ze'evi and Jonathan Pollard.

Joel Katz deals with issues of religion and state here and here.

The Velveteen Rabbi takes us to second international mikveh conference.

The Jew in the City gives us a reason to be optimistic . She also asks, "Why do Orthodox Jews have so many children?" It has nothing to do with the proverbial "hole in the sheet" (or does it?).

Ingathered, prompted by the remarks of a certain ex-President of the U.S.A., asks, Are 'Russian' Israelis an Obstacle to 'Peace'?

A Simple Jew, back after a long hiatus, learns self-sacrifice from a motorcycle enthusiast.

Israelity presents Hebrew U. lip-dub and teaches us the benefit of clapping your hands.

The Independent Patriot opines about Political Correctness, Cultural Relativism and the Need to Repair the World.

Isramom blogs about Orthodox Jewish feminism in Reaching for the Stars or Slippery Slope? She also tells a nosy Hasid to "Stay OUT of my hair!" .

Leah Aharoni asks Do Israelis speak Hebrew? Check out her scholarly post to see the answer!

Mordechai Torczyner is looking for a Jewish singer that sings with authentic passion. There was one thing I did not understand about his post: Who in the world is Eminem?

Ricki's Mom learns an interesting lesson from the rescue of the miners in Chile.

Frume Sarah weeps By the Waters .

Minnesota Mamaleh blogs about teaching our children to ask for help? .

Ima on (and off) the Bima has a Shalom Sesame {Review & Giveaway} .

Tzvi Fishman can't figure out why Jews are not coming to Israel. Try to guess which of the talkbackers to his post are actually creations of the former Hollywood screenwriter.

Rafi, along with the rest of us, celebrates the assassination of terrorists.

Joe Settler at the Muqata talks about Israel as a Jewish and democratic state.

Yaak teaches us how to spell Ahmedinejad in Yiddish.

Speaking of Ahmadinejad, Eliyahu tells us that some Lebanese do not like him.

SnoopyTheGoon has a pic of Mahmoud the Mad and says "Thanks, Adrian..." to another "lover" of the State of Israel and the Jewish People.

Aussie Dave reminds us that Rupert Murdoch is our friend.

Thank you to those of you that submitted posts. I hope that you all enjoyed this edition. To sum things up: 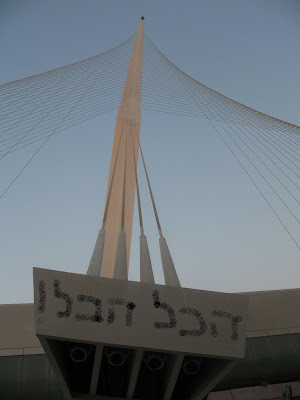 That concludes this edition. Submit your blog article to the next edition of Haveil Havalim using the carnival submission form.

Past posts and future hosts can be found on the
blog carnival index page.

Great HH Debut! Thanks for the place of honor!

Thanks for the mention! Next week is my turn, so wish me luck!

Thanks for doing this!

Great job - mazel tov on your debut edition! Thanks for including my post :-)

Thanks for the link, Cosmic!

Hope you enjoyed putting this together as I did reading it!! Kol HaKavod. And thanks for including me.

Thanks for including the two links I sent and a bonus one! :)

Thanks everybody... a blurb on your blogs would be appreciated :)

Nice job, and thanks for the link!

Religion and State in Israel said...

Thanks for all the work on HH!

WOW, you did a great job! I also have to get up the courage to do one some day (when I have a BIT of free time....)