A Monument To Stupidity

I saw this plaque at the base of a tree in Kfar HaMakabiah: 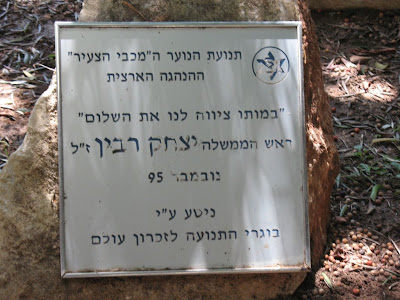 Twelve years have gone by and we can look back on Rabin's term as Prime Minister and his "accomplishments" with a little bit of historical perspective. He certainly did not "bequeath us peace". He made what will probably be regarded as one of the most foolish diplomatic deals ever. The Oslo Agreements are a monument to stupidity, naiveté, corruption and evil.

I hope that one day the powers that be in Kfar HaMakabiah will have the wisdom to remove this kitsch from their premises.
Posted by Cosmic X at 10:36 AM