Dealing With the Snow

Today, the fast day of Asara BeTevet (the 10th of Tevet), a perhaps unprecedented amount of snow has fallen in Jerusalem. The web is full of beautiful pictures of the holy city covered with snow. Here is a different kind of Jerusalem snow picture: 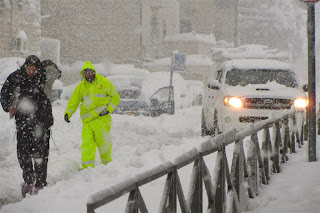 So what is the story behind the picture?

My neighborhood was blacked out from about 12:30 AM last night. These snow storms have a way of causing blackouts! Many times the snow weighs down tree branches which eventually break and fall to the ground. On the way down, if there is a power line on the way, the branch takes it down with it.

It was great going to daven this morning and seeing all the tzadikim that in spite of the inclement weather made it to the synagogue. There too there was no power but with the help of the breaking dawn and a few candles we were able to daven.

After davening I saw this devoted worker from the Israeli Electric Company (the guy in yellow) on Najara Street. He came to fix whatever was wrong. God bless him! I asked him when the electricity would be back and he replied, "Soon".

And so it was.