This invitation was posted on Facebook by the Lehava organization, whose purpose is to prevent assimilation in the land of Israel: 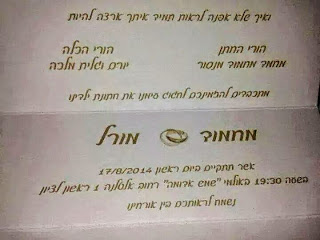 For those of you who do not understand Hebrew, the invitation is to the "wedding" of a Jewish Israeli girl named Moral to an Arab named Mahmud. If I am not mistaken the girl converted to Islam.

The girl's father strongly opposes the wedding, as can be seen here. Lehava has promissed to protest the wedding, which God forbid will take place at Shemesh Adumah (Red Sun) Hall in Rishon LeTzion on Sunday at 7:30 PM. Youth from the radical left Meretz party also promissed to be there to "protect" the couple from the protesters. Leftist activists also succeeded in having Lehava's Facebook page removed.

Here's a report from Tzinor Laila: