"When it goeth well with the righteous, the city rejoiceth; and when the wicked perish, there is joy" (Proverbs 11:10)

I am certainly happy that Ziad Abu Ein dropped dead, apparently from a heart attack. He was convicted of murdering two Israeli boys, Boaz Lahav and David Lankri.

These are the boys that Ziad Abu Ein murdered: 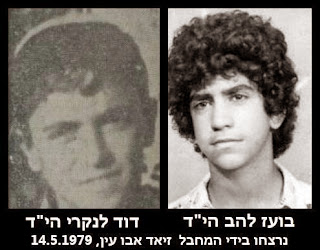 May Ziad Abu Ein rot in hell together with Arafat and all the other rogues.