COVID-19 and the Courtyard Minyans

Not long after the COVID-19 pandemic started it became known that the virus spreads quickly when there are a lot of people gathered in a closed space. For those of us who attend synagogue, davening became a potential "superpreading event". In Israel the government has put various limitations on public prayer, sometimes entirely forbidding worship inside buildings. These government regulations were the impetus for the creation of "courtyard minyans". 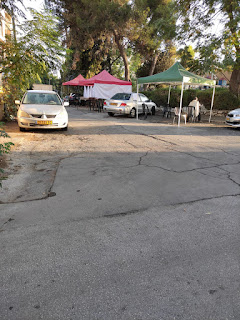 One can find at least one of these minyans on almost every street in Jerusalem. They may be taking place in the courtyard of a synagogue or an apartment building, in a parking lot, on a dead end street, or even on the median dividing a boulevard. Special canopies, tents, plastic "keter" chairs, and tables, in places where you would not expect to see them, were all signs that here is a courtyard minayn.

An interesting byproduct of these minyans was the creation of new congregations, based on geographical location more than on the religious rite or the style of the congregants. Asheknazim, Sefardim, Hasidim, National-religious Jews, each of which would usually prefer to daven in their own synagogues, were now davening together. Not that we needed any proof, but this once again showed that we really are one.

Now that the rainy season has begun, it will be interesting to see what will happen to these minyans.