I see you every day on my way to work. You direct traffic, check busses for suicide bombers, and keep the order in general. I appreciate what you do, even though I never stopped to say "Thank you."

Rumors have it that it is you who will be called upon by the Israeli government to implement its "disengagement" plan. This will require you to forcefully evict Jews from their homes in the Land of Israel. These Jews that you will violently evict from their homes have done no wrong. They paid for their homes in full. They work, pay taxes, serve in the army, and are in general model, law-abiding citizens.

The disengagement law may have been passed by a democratically elected parliament, but that does not make it moral. Bona fide governments have passed many evil laws. Most of Israel's leading rabbis adamantly oppose this law, because of the many Torah prohibitions that it involves. This particular law is a outrage, an act of iniquity that cannot be justified. Are you willing to be the one to execute this wickedness?

Before you answer I would like to remind you of a concept in Jewish law: Ein Shaliach LiDevar Aveirah. There is no emissary for sinning. In other words, if someone tells you to sin, and you listen to him and sin, you are the one that is liable before the L-ord! If G-d tells you not to sin, and a man tells you to sin, whom are you going to listen to? We all know that Adolph Eichmann claimed at his trial "I was just following orders." Are you going to try to claim the same thing when your children ask you, "Daddy how could you throw those widows and orphans out of their house?" 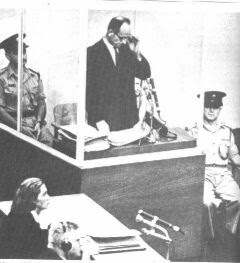 If the day comes, G-d forbid, when you are asked to throw people out of their homes or any other order that is against the Torah, I hope that you will have the moral strength to say no. If that means turning in your badge, then so be it. Have faith that your livelihood is from G-d, and that He will help all those that walk in the path of righteousness!
Posted by Cosmic X at 11:00 AM