This Year In Jerusalem

Jews all over the world are busy preparing for Pesach. In Jerusalem, and lehavdil in Monsey, Borough Park, Crown Heights and New Square the Yidden are very busy. There is a lot of work to do: the house has to be cleaned and the kitchen has to be kashered. The pesachdik dishes have to be taken out of the closet and the chametzdik dishes have to be locked away. A lot, and I mean a lot of groceries have to be bought: Matzot, wine, meat, and all the other food that we'll eat at the seder. The fathers are thinking of new ideas to keep the children awake and alert in order to hear the story of the exodus from Egypt. If all goes well all the mitzvot of Passover night will be fulfilled properly, and the family and guests will have an enjoyable and meaningful experience.

However, Passover was not meant to be this way. The entire Jewish People was supposed to leave their homes and come to Jerusalem. How could everbody fit in Jerusalem? This is one of the miracles that G-d did for our forefathers: "...nor did anyone say to his friend,'The place is too crowded that I should lodge overnight in Jerusalem'(Avot 5:5)." The mountains surrounding Jerusalem would be white from the multitude of sheep being brought as sacrifices. Each chavurah(group) would bring their korban pesach(paschal sacrifice) to the Temple. Afterwards the entire Jewish People would hold their seder in Jerusalem. The sacrifice would be eaten. The sound of people saying the Hallel would reverberate throughout the city. 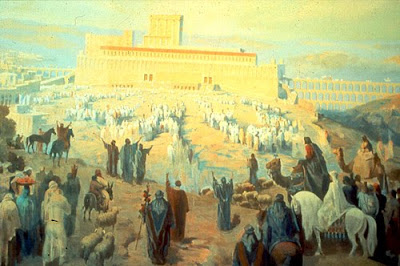 At the end of the seder we sing "Leshannah haba'ah birushalayim habenuyah.(Next in in a rebuilt Jerusalem.)" Jerusalem today, with all of its neighborhoods, with the hundreds of thousands of Jews that live here, with all of its beauty and grace is still in a state of destruction. As long as the heart and soul of Jerusalem, the Temple is in ruins, the entire city is in ruins. "On Mt. Zion which is desolate, foxes walk upon it(Lamentaions 5:18)." Unless a miracle happens and the Temple is speedily rebuilt, our Pesach won't really be Pesach. Let's not forget that.

May we all merit to see the Beit HaMikdash(Temple) rebuilt speedily in or days.

I had no clue where you were going with this at the beginning...wow...must admit, I never thought of it that way. The Seder did NOT take place at home. They were all off in Yerushalayim together...Wow. Excellent post.

Although, could you include Baltimore in the list of "lehavdil" towns getting ready for Pesach? We may not be New Square or Crown Heights or Boro Park (and I doubt that most bloggers are, altho there are exceptions), but we DO keep Pesach... ;)

We're busy preparing here in Los Angeles too. I would love to be in Jerusalem though! I yearn to be. Sometimes it gets so strong it's like an ache. That reminds me of the Seinfeld episode when Kramer tells George he yearns, and George admitted he craved but never yearned. Then Kramer went off on his trip to Hollywood.

Like the candle that stays strong, no matter how many others it lights, Jerusalem can hold all of the Jews who come "l'regel."

We are gathering in Shiloh of the mishkan.

Jerusalem might be in less ruins if we had a mayor who cared about actually revitalizing it instead of building Shabbas clocks. As to the Temple ... well, I hold by Rambam that we won't need sacrifices anymore

As far as cleanliness goes, I think Jerusalem has improved since the present mayor took office.

With regards to the Temple, the Rambam's opinion, halacha lema'aseh, is expressed in the Laws of Kings and Their Wars 11:1. There the Rambam writes, among other things, that the Mashiach will build the Temple and sacrifices will be offered.