Let's face it: the guy doesn't have a chance. He would have a much better chance of winning an election in Sderot. So why is he running for the Mayor of Jerusalem? It could be that he knows that this time around he won't win, but he want's to "put himself on the political map." Perhaps he likes seeing his picture hanging from buildings in the Capital: 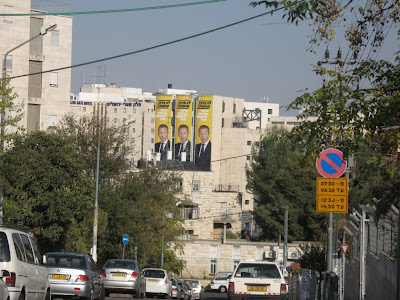 Who am I, a guy struggling with his overdraft, to argue with Arcadi Gaydamak?
Posted by Cosmic X at 7:08 PM

I really don't like the platform as he described it in In Jerusalem.
Gaydamak--Not For My Jerusalem