Not the Jblogosphere Modestry Patrol 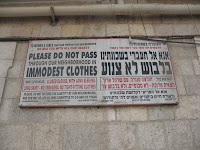 I'll say it straight out, without further ado: The God of Israel hates obscenity, bawdiness, lewdness, whatever you want to call it (see Sanhedrin 51B - 52A). It is not the He dislikes it, or that He has reservations about it: He hates it! All of the Hollywood "culture", with its half naked actresses, pop singers, etc. is not "cool" nor is it "chic". It is a snare to anyone who wants to progress in spirituality, and a stumbling block to anyone who wants to be something more than an animal that walks on two legs.

Therefore I plead with everyone here in the jblogosphere: Please do not post pictures of scantily clad women on your blog. If you consider yourself religious, posting such pics is absolutely in opposition to the Torah, in letter and in spirit. If you don't consider yourself religious, consider the fact that posting such photographs degrades women, lowering them to being nothing more than objects for male lust.

Let's clean up the neighborhood! Thanks in advance and yishar koach!
Posted by Cosmic X at 6:58 PM

While I hear the sentiment behind your words, my initial reaction is to wonder what prompted your post? I follow many different types of blogs in the jblogosphere, and I haven't noticed improper photos.

I too am wondering what prompted this...

What prompted this was pictures of a scantily clad model in a blog that I otherwise respect. No, I will not provide a link. :)

I appreciate your sentiment but suspect that we disagree about much of this.

That is not to say that one should run around posting nude pictures, but that I think that sometimes we don't give people enough credit.

Above and beyond that is the question of what is tznius and what is not.