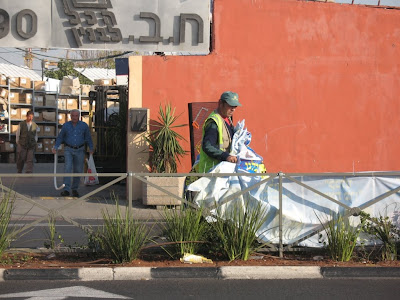 We thought that life was returning to normal, and that the streets of Jerusalem would be clean of political fliers and posters. But it seems that the election process itself, and all the more so the results of the election, have left the ultra-Orthodox community wounded. The pain felt from these wounds is reflected in a post election "paper war" that is "decorating" the city's walls and littering its streets.

It started with wall posters stating the Talmudic dictum that "Jerusalem was destroyed because they disgraced Torah scholars." The poster was signed "The Honor of Torah". This is a somewhat ambiguous poster for one not familiar with Hareidi politics and social codes, but for the rest of us the hint was clear: the race for mayor was lost to the secular candidate (who will bring about the destruction of Jerusalem) because of Meir Porush, who disgraced Torah scholars.

If anyone had doubt as to who and what the posters were referring to, the following day the streets were littered with fliers that were a carbon copy of the wall poster. The difference was that the flier had two sides. The flip side of the flier was an editorial from the Yated Ne'eman newspaper (from the 15th of Cheshvan 5769), which is the mouthpiece of the Degel HaTorah (Lithuanian) faction in Agudat Yisrael. It was a very long editorial, which among other things was a trial in absentia of Meir Porush, although his name was not explicitly mentioned. However, his political crimes were described in detail:

"He acted with public irresponsibility, he caused intense arguments, he divided the public, he turned his back on the great Hasidic leaders and Torah luminaries."

Needless to say the paper found him guilty as charged. The editorial declared Porush as being unworthy to be a public servant for the ultra-Orthodox community.

This of course could not be left without a reply. So today we were greeted on the way to work with a poster singing the praises of Meir Porush. Why wasn't I surprised?

As far as the editors of Yated Ne'eman are concerned, Meir Porush's political career is finished. It will be interesting to see Porush's next move. He is currently a member of the Knesset, but it is now doubtful that UTJ will give him a place on the list for the elections that are scheduled for February. Will he continue in the city council? Will Barkat give him the job as "assistant-Mayor"? Will he split away from UTJ and form a rival party? Time will tell.
Posted by Cosmic X at 6:53 PM

The Kavod HaTorah posters plastered all over Bayit veGan. Many had Rav Eliyashiv's picture, and partial letter.

Later on Porush put out a poster implying that everything was cool between him and Rav Eliyashiv.

Porush also had Rav Drukman's endorsement, but Barkat implied that he had it.

So, I tend to believe Porush on Rav Eliyashiv too.

There is no question that Rav Elyashiv supported Porush in the mayoral race as I previously mentioned:

"Rav Elyashiv was "mocheil al k'vodo" by supporting Porush's candidacy for mayor. The leader of "Lithuanian Jewry" requested from his flock that they do everything they can to get Meir Porush elected. However, some of Rav Elyashiv's followers were not so forgiving. They were so angry at Porush for going against "da'as Toyre" that they themselves went against "da'as Toyre" by waging an aggressive campaign against him (wall posters, newspapers, fliers) and not voting for him. A true UO paradox! "

However, that support was in order to avoid a desecration of the Holy Name, that because of internal Hareidi strife a secular candidate would win the election.

Now that all this is behind us, it looks like Porush is in trouble with the Litvaks.