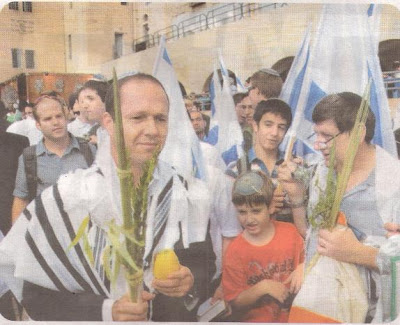 Jerusalem has a new mayor: Nir Barkat. Those of you that follow this blog know that I supported his rival, Meir Porush. I felt that Porush was much more qualified for the job, and that choosing between the two leading candidates was really a no-brainer. What's more, as a Torah observent Jew, it seemed to me that we are required to choose the God-fearing candidate. Finally, Barkat's record as a political zigzagger along with his affiliation with the ideologically empty and corrupt Kadima party made him one of the last people that I would vote for.

The majority of Jerusalemites that made it to the voting booth felt otherwise and they put the slip with Nir Barkat's name into the envelope for mayor. There were many factors that lead Barkat to victory and Porush to defeat. I'll list a few:

1) Hard work: Barkat worked hard over the past few years in order to get the the mayor's chair. He worked hard to change his image among the city's voters from a native-Israeli Tommy Lapid to an innocuous run-of-the-mill Israeli. He was willing to meet with rabbis and take part in religious ceremonies. (Check out this post from 2005!!!) He succeeded in distancing himself from Kadima and their plans to divide the city.

2) Money: He invested/raised/spent a lot of money on this campaign. Eyal Arad and Li'or Chorev don't work for free.

3) Internal ultra-Orthodox strife: United Torah Judaism was far from unified. The desecration of God's name which Rav Elyashiv was worried about was realized. According to various reports members of the Gur chassidic group not only abstained from voting to Porush, they actually voted for Barkat. Could be.

There are some that will say that this election was the second round of last year's municipal elections in Beitar Ilit. Many UOs can not and did not forget Porush for going against the rabbis that wanted R' Pindrus to continue being mayor of the Hareidi town. Porush won the first round. His candidate got elected. Rav Elyashiv was "mocheil al k'vodo" by supporting Porush's candidacy for mayor. The leader of "Lithuanian Jewry" requested from his flock that they do everything they can to get Meir Porush elected. However, some of Rav Elyashiv's followers were not so forgiving. They were so angry at Porush for going against "da'as Toyre" that they themselves went against "da'as Toyre" by waging an aggressive campaign against him (wall posters, newspapers, fliers) and not voting for him. A true UO paradox!

4) National Religious Support: The national religious vote was certainly divided between the two candidates. This was in spite of the fact that most of the rabbis supported Porush. However, many of the NRs don't listen to rabbis. In the polling station where I voted the Barkat representative was a NR guy. This community, if it can be called one, is leaderless; every man does what is right in his eyes.

5) Secular Support: Porush probably lost any support that he had in this sector after his remark in Yiddish that the Hareidim are multiplying quickly and soon there won't be any "ChiLOYni" mayors in the major cities. Porush forgot that "the walls have ears", and that some of those heimishe guys in the audience have MP3 recorders and digital cameras. This was a silly blunder which may have cost him the mayoralty.

I hereby bless Mr. Barkat on his victory and wish him much success in running our beloved city. Hail to the chief! I hope the Nir Barkat that will be running our city will be the one with covered with a prayer shawl grasping a lulav and not the one wearing a Kadima tee shirt with a cup of beer in his hand. 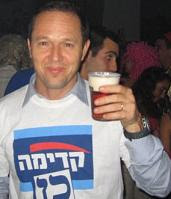 Thanks for your analysis.

It was a pleasure, Yaak.

How could you forget the chareidi conversion psak which cost Porush votes?

I wrote that I only mentioned a few of the reasons. I don't think that too many people made a connection between Porush and Rabbi Sherman.