The Prevarications of Disengagement (Part 2)

One of the claims used to sell Prime Minister Sharon's disengagement plan is that we will finally be rid of all those nasty Islamofascists from Gaza (disengagement cultees call them Palestinians). If we destroy the Jewish communities in the Gush Katif and other areas of the Gaza strip, the Islamonazis will be on one side of the border, and we will be on the other side of the border. Thus peace shall reign in our little corner of the Middle East.

This sounds familiar. All this was supposed to happen with the implementation of the "Gaza and Jericho First" agreement. Of course, we all know that exactly the opposite occurred. The number of Israelis killed and wounded by Arab terrorists(yes I use the t- word) skyrocketed. Based on past experience, this will happen again if G-d forbid Sharon succeeds in carrying out his idiotic program. What's more, the Gazans will continue to cross the border to work in Israel. Soldiers will continue to die when the Arab ingrates blow themselves up at the border crossings which were set up for their economic benefit. Israeli towns and villiages near Gaza will become the victim of PA police snipers. The Islamofascists will continue to target Israeli civilians with homemade missiles and probably with more sophisticated ones that will be smuggled accross the Egyptian border under the Egyptian army's watchful eyes.

Those responsible for the careless decision to import terrorists from Tunis and arm them, in a normal country, would have been distanced from any position of power. Indeed the Israeli electorate rejected those that have made them mourners and cripples. However in Israel's dysfunctional political system, the present government is implementing the very policy that was rejected by the electorate. How utterly disgusting it is to see Shimon Peres once again a minister in the Israeli government! Excuse me while I puke! 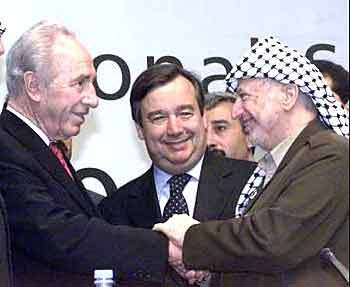