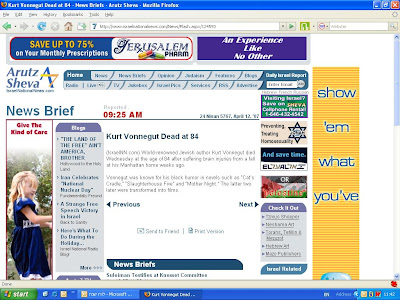 (IsraelNN.com) World-renowned Jewish author Kurt Vonnegut died Wednesday at the age of 84 after suffering brain injuries from a fall at his Manhattan home weeks ago.

Vonnegut was known for his black humor in novels such as “Cat’s Cradle,” “Slaughterhouse Five” and “Mother Night.” The latter two later were transformed into films.

Wikipedia gets it right:

When I was in high school Kurt Vonnegut was my favorite author. But then I grew up. That is to say that he had a great sense of humor, but his ideas were totally unrealistic.