Lately I was offline, on vacation for a few days in the Galilee. The Galilee is simply beautiful, a feast for the eyes! I hope to share with you all a few pictures from the trip so that you will see what I mean.

On the war north we took a "detour" to Gilboa mountains. These mountains are probably best known as being the place where King Saul and his sons fell in battle against the Philistines (1 Samuel Chapter 31):

When David heard about this terrible defeat and the death of Saul and his sons, he curses the mountains of Gilboa in his famous lamentation (2 Samuel Chapter 1):

17 And David lamented with this lamentation over Saul and over Jonathan his son, 18 and said--To teach the sons of Judah the bow. Behold, it is written in the book of Jashar: 19 Thy beauty, O Israel, upon thy high places is slain! How are the mighty fallen! 20 Tell it not in Gath, publish it not in the streets of Ashkelon; lest the daughters of the Philistines rejoice, lest the daughters of the uncircumcised triumph. 21 Ye mountains of Gilboa, let there be no dew nor rain upon you, neither fields of choice fruits; for there the shield of the mighty was vilely cast away, the shield of Saul, not anointed with oil. 22 From the blood of the slain, from the fat of the mighty, the bow of Jonathan turned not back, and the sword of Saul returned not empty. 23 Saul and Jonathan, the lovely and the pleasant in their lives, even in their death they were not divided; they were swifter than eagles, they were stronger than lions. 24 Ye daughters of Israel, weep over Saul, who clothed you in scarlet, with other delights, who put ornaments of gold upon your apparel. 25 How are the mighty fallen in the midst of the battle! Jonathan upon thy high places is slain! 26 I am distressed for thee, my brother Jonathan; very pleasant hast thou been unto me; wonderful was thy love to me, passing the love of women. 27 How are the mighty fallen, and the weapons of war perished!

Baruch Hashem, the Philistines are long gone. The people of Israel have returned to the Gilboa mountains and their surroundings. The view is spectacular. This pic does not do it justice, but it's better than nothing. Click on it for an enlargement: 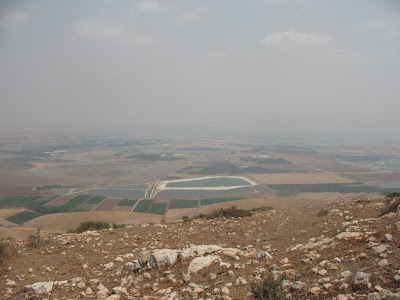 I remember this Gilboa post from a few years ago.

you should visit the top of "givat hamoreh" (the mountain next to afula. there is a lookout tower at the top from which you can see the following:

and a just plain stupendous view of the lower galil.

...the battlefield of yoshiyahu at megiddo

and there be more which i've forgotten. so much biblical history all around you there.

Sounds good. I'll have to check it out the next time I'm up north.