It's been a while since I posted a "mystery tree". But this one is really isn't such a mystery. Do you recognize it? 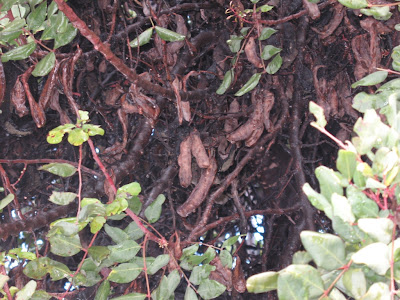 Update: Rafi got it. This is a carob tree.

The carob tree stars in at least two places in the Talmud. One is the story of Choni HaM'agel:

One day he was journeying on the road and he saw a man planting a carob tree; he asked him, How long does it take [for this tree] to bear fruit? The man replied: Seventy years. He then further asked him: Are you certain that you will live another seventy years? The man replied: I found [ready grown] carob trees in the world; as my forefathers planted these for me so I too plant these for my children.

Choni sat down to have a meal and sleep overcame him. As he slept a rocky formation enclosed upon him which hid him from sight and he continued to sleep for seventy years. When he awoke he saw a man gathering the fruit of the carob tree and he asked him, Are you the man who planted the tree? The man replied: I am his grandson. Thereupon he exclaimed: It is clear that I slept for seventy years."

Another famous story from the Talmud where a carob tree plays a major role is the story of Rabbi Shimon Ben Yochai and his son Elazar:

Rabbi Shimon and his son went and hid themselves in the study hall, and his wife brought him bread and a mug of water and they dined. When the decree became more severe... they went and hid in a cave.

A miracle occurred and a carob-tree and a wellspring of water were created for them. They would remove their garments and sit up to their necks in sand. The whole day they studied; when it was time for prayers they robed, covered themselves, prayed, and then put off their garments again, so that they should not wear out. Thus they dwelt twelve years in the cave.

Here's a question: What's the connection between carobs and gold? The answer:

Ceratonia siliqua, the scientific name of the carob tree, derives from the Greek kerátiōn (κεράτιων), “fruit of the carob” (from keras [κέρας] "horn"), and Latin siliqua "pod, carob." The term "carat", the unit by which diamond weight is measured, is also derived from the Greek word kerátiōn (κεράτιων), alluding to an ancient practice of people in the Middle East weighing gold and gemstones against the seeds of the carob tree. The system was eventually standardized and one carat was fixed at 0.2 grams.