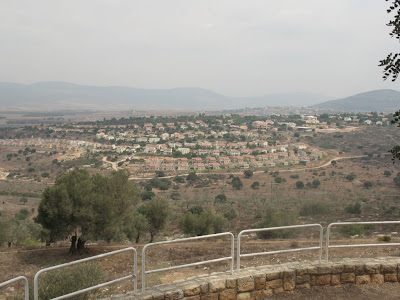 Do you see those red roofed houses nestled so nicely on the hill? That's Mitzpe Hoshaya, a religious community in the Galilee. Nice, isn't it? Happiness is the rebuilding of the land of Israel (See Or HaChaim on Deuteronomy 26:1).

I took the picture from the ruins of Tzipori. Tzipori was an important town in the land of Israel after the destruction of the Second Temple. The Sanhedrin, the High Court of Jewish Law, was here for a while. Many remains from the Mishnaic era have been found here. For me the most impressive find was the ancient synagogue of Tzipori. It has a mosaic floor with several different motifs: 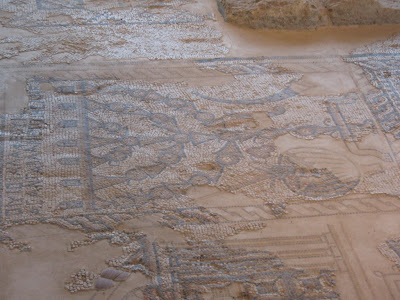 Could you make out the seven branched Menorah? The Rambam holds that the branches of Menorah were straight and not curved. In every ancient depiction of the Menorah that I seen here in Israel the branches are curved. Of course this has no bearing on deciding halacha.

I don't know if I will be posting again before the New Year. There are so many preparations to be made.

May you all be written and sealed in the Book of Life. In 5769 may we rejoice in the rebuilding of the land of Israel and the banishing of God's enemies from it. Amen.
Posted by Cosmic X at 5:57 PM

tzippori is beautiful. I stayed there a few years ago...

I was there just last Friday, really cool.

In addition to the curviness of the branches, there is controversy about the menorah's base. Here it has 3 legs, on Titus' arch it is a solid hexagonal block.

This mosaic, at least, is from the 5th century so maybe they had forgotten the details of the menorah already.

Did you see the dedications to donors in the mosaic? I.e.
דכיר לטב יודן בר יצחק הכוהן
This Judah Cohen guy must have made a big contribution to the Tzipori Synagogue building fund...

That's interesting what you mention about the base of the Menorah. I think that the depiction of the Menorah here is more consistent with our sources (like the Talmud) than the one on the arch of Titus. I'll try to check that out.

Do you think that that they used to give Yuden Bar Yitchak HaKohen maftir or shlishi?

The Rambam in Hilchot Beit HaBechirah 3:2 says that the Menorah has 3 legs. In the Frankel version of the Rambam in the Mekorot and Tiyunim he says that Rambams source is Midrash Tadshe.