I try to be positive. I like to write about positive things, to see the "good of Jerusalem" (Psalms 128:5). Unfortunately I don't always succeed, especially if I write about politics. Today I have the pleasure of writing a positive post about something political.

Meir Porush is one of the candidates in Jerusalem's mayoral race. The Porush campaign is ingenious. Take a look at the advertisement on this bus: 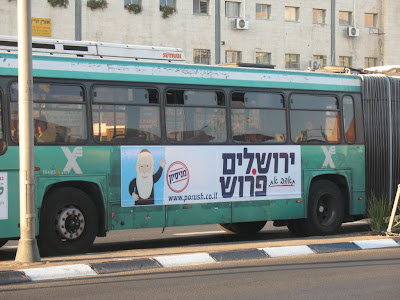 It says, "Jerusalem will love Porush". In the circle it says "from experience". So what's so ingenious? Take a look at the picture of Porush. They made him into a comic book character! That is ingenious! Most candidates post their photos all over the place. The people at the Porush campaign realized that a photo of a Chasidic Jew with a long beard may turn off certain voters, and that's an understatement. Lopolianski, Jeruslaem's outgoing ultra-Orthodox mayor, had a short, well trimmed beard gave him a less "threatening" appearance than Porush. Porush's advertising agency apparently realized this, so they turned Porush into a cuddly cartoon character. Isn't he just adorable? 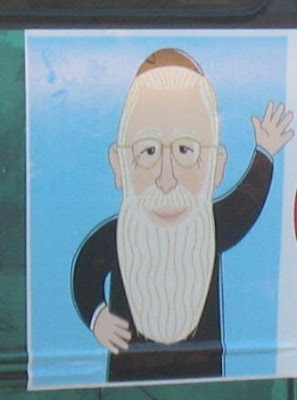 Porush is a great person in general. It is a shame his beard scares some people off.