Our Daughters Are Given Over To Another People

Here's a great poster, apparently created by those who were responsible for this one. Click on it to enlarge: 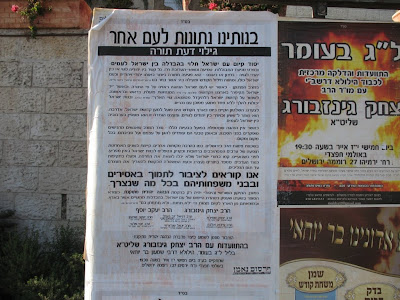 Here is my translation of most of the poster. Additions for the sake of style and understanding are included in square brackets:

Our Daughters Are Given Over To Another Nation

A Revelation of the Opinion of Torah

The foundation of the subsistence of the nation of Israel is dependent upon the differentiation of Israel from the gentiles - and in particular the prevention of assimilation and intermarriage, Heaven forbid. Any relationship between a Jewess and a gentile man or a Jewish man and a gentile woman - whether it is willing or coerced - is a most serious blow to that Jew or Jewess and the entire Jewish nation. And it constitutes a desecration of holiness and is a betrayal of God that has chosen us (Maimonides, Laws of Forbidden Relations).

In a fit situation, when the nation of Israel has proper leadership according to the Torah, and when "the Israel's hand is strong" in our Holy Land (Laws of Idol Worship ch. 10), the leadership acts, first and foremost, to guard the holiness of Israel and "to be separated from the impurity of the nations of the land" ( Ezra 6:21), and the daughters of Israel can walk without the fear of dangerous contact with gentiles.

To our dismay, the present government in the Holy Land does not act for the purpose of Israel's holiness. On the contrary, it strives for "equal rights" for Jews and gentiles. And by this very definition it is interested in the intermingling of Israel and the Nations.

When there is no leadership that deals in practice with these problems - a situation is created where people feel abandoned to danger, and in a natural way they get up to defend themselves and their environs.

In the Pisgat Ze'ev neighborhood, as in many other places, in the past few years there is a phenomenon of Arabs that wander about in the streets and shopping centers, and they harass the daughters of Israel with impunity. Two weeks ago, young Jewish men that could not stand this disgrace arose, and acted resolutely against the Arabs. A number of the young men were arrested, and now the Police requests to lengthen their imprisonment until the end of [the judicial] process.

WE CALL UPON THE PUBLIC TO SUPPORT THE PRISONERS AND THEIR FAMILIES WITH ALL THAT IS NEEDED.

Of course the fundamental, deep-rooted repair will only be the establishment of PROPER JEWISH LEADERSHIP, like Ezra the scribe at his time that dealt with the purification of the pedigree of the nation of Israel, with the separation from the gentiles that were in the land and their removal from the land in order to fulfill the Divine precepts:"Do not give them encampment...Do not marry them.(Deuteronomy 7:2-3).

Israel Radio's Paris correspondent Gil Michaeli is reporting that a French Court of Appeals overturned on Wednesday the libel judgment against Phillipe Karsenty in which he was convicted of libeling France-2 TV news journalist Charles Enderlin.

Karsenty said the 'death' of 12-year-old Mohamed Al-Dura at Netzarim in Gaza in September 2000, on which Enderlin filed a report, may have been staged, and that it was unlikely that the death was caused by IDF soldiers.

Karsenty is founder and president of Media-Ratings, a media ratings agency that monitors French media outlets, particularly for anti-American and anti-Israeli bias.

Could this be a sign that the world is regaining its sanity?

Karsenty Wins Court Decision!!
Posted by Cosmic X at 12:04 AM No comments:

You can see the pedestrian passage that is being built on the side of the bridge: 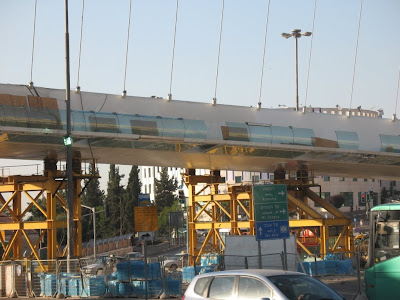 I think this passage will be useful as it enables pedestrians to get from the area of the Central Bus Station to Herzl Blvd. without having to wait at all of the traffic lights.
Posted by Cosmic X at 10:19 PM 1 comment:

What's So Special About Independence Day?

Recently opened archives show Arabs left Israel in 1940s and were not driven out
Posted by Cosmic X at 10:22 PM No comments:

Email ThisBlogThis!Share to TwitterShare to FacebookShare to Pinterest
Labels: Land of Israel, links

The Case for Religious Zionism

Some facts about the Palestinians
Posted by Cosmic X at 6:55 PM No comments:

The Naqba was not the terrible tragedy that befell the Palestinian refugees. They were collateral damage, soon to be turned into sacrificial victims by imprisonment in the camps. The real Naqba was the catastrophe of Jewish sovereignty in Dar al Islam — a humiliation to the Arabs, a blasphemy to Muslims.

Is The Shabak Harrasing Rabbi Nati? 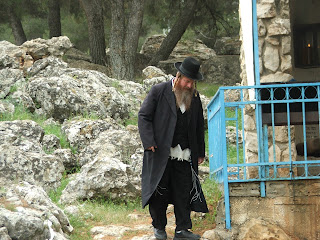 This is Rabbi Nati. He certainly looks harmless. However, from what he tells us, the Shabak thinks otherwise. Check out his SOS!
Posted by Cosmic X at 1:37 PM No comments: