Together - The Nation is With Us

That is a pretty long name for a political party. I must say that I am pleased that this party is up and running together with "Otzmat Yisrael". What does the list look like?

The combined Yachad-Otzma Yehudit list is headed by Eli Yishai, followed by Chetboun, and Michael Ayish, a haredi (ultra-Orthodox) political activist from Safed. In fourth spot is Marzel, while Sasson Trebalsi, a close associate of Mazuz, is at number five. The sixth spot will be taken by national-religious Rabbi Amital Bareli, and seventh by haredi candidate Dudi Shomenfeld.

They just may get my vote.
Posted by Cosmic X at 10:28 AM No comments:

Email ThisBlogThis!Share to TwitterShare to FacebookShare to Pinterest
Labels: Baruch Marzel, Eli Yishai, Together - The Nation is With Us, Yoni Shetbon

According to the Srugim web site, soccer legend Eli Ohana has resigned from the Jewish Home list. Ohana wrote to Bennett that he did not expect the controversy that his candidacy would cause.

This is good news for the Jewish Home Party, in that it shows that the rabbis and the regular rank and file still have the ability to influence what happens in the party.

I hope that Bennett learned that although he is the leader, the Jewish Home is not a one man show, and that he still has to take counsel with others before making decisions.

This is the Jewish Home List after Naftali Bennett's latest acquisistions(the people I choosed in the primaries are in bold):

Sorry, but after reading up a little bit about Eli Ohana, it is clear to me that he is not fit to be an MK. I will not elaborate on this. Suffice it to say that this "pick" by Bennett is an insult to all party members. And if Bennett's idea was to add more "mizrahi" Jews to the list, he could have moved Avichai Boaron up to a realistic spot. Perhaps Bennett wants to strengthen Eli Yishai's party.
Posted by Cosmic X at 5:03 PM No comments:

This lady is a pretty rotten actor. But my real complaint is with the journalists who are partners to this fraud:

In the latest incident of “Pallywood”, an elderly Arab woman who was evacuated by IDF troops from a business in Hevron for security reasons, put on a show for extreme leftists who filmed the eviction.

The business was evacuated after a firebomb was thrown from it at the homes of Jews in Hevron. The local Arabs, who knew when the troops would arrive to evacuate the business, invited leftist activists and journalists to document the evacuation.

In the video, the elderly woman is seen weeping as her daughter instructs her how to “cry” in front of the cameras. However, as the woman begins to cry, the daughter is seen moving aside and smiling towards the journalists and photographers.

Updated: Here are the results according to IsraelNationalNews.com (my choices are in bold):

I am happy to say that all my choices made it into the top twenty, with the top six having a realistic chance of being elected according to the polls.

It is interesting to note that in the primaries themselves, barring the elections for the party chairman, the top vote getter was Ayelet Shaked, a secular woman from Tel Aviv. Rabbi Ben-Dahan, who came in second place, could have made it into the list in one of Tekuma's reserved spots. Both candidates were rewarded by the voters for their outstanding work: Shaked in the Knessett and Ben-Dahan in the Religious Affairs Ministry.

How to Vote in the Primaries

The Jewish Home party produced a film explaining how to vote in the primaries:

I've also revised my choices for the primaries (The top three get two points, the remainder one point):

Many are asking in the wake of the murder of four Jews by a Muslim terrorist in the Hyper Cacher store in Paris, "Should France's Jews make Aliyah? Should they leave their homes, livelihoods and all that is familiar to them to start anew in their true homeland, the land of Israel?

Of course they should! Just as I wrote a long time ago:

I believe that living in Israel is one of the positive precepts of the Torah, and as such I believe that every Jew should make his home here.

Even one who makes aliyah while single has to do it with the knowledge that Eretz Yisrael, along with Torah and Olam Habah is one of the things that is acquired al yedei yisurim. While I strongly encourage aliyah, it has to be done wisely. A person should know what he is getting into and be prepared for the challenges that face him.

Now that the ground is burning under their feet, they should get on the first El Al flight before they get burned, God forbid! Israël est la patrie de tous les Juifs!
Posted by Cosmic X at 7:57 PM No comments:

The Likud lost a visionary:
Posted by Cosmic X at 6:49 PM No comments:

My Picks For the Jewish Home Primaries

I cannot say that I know enough about all of the candidates to claim that I can really make an informed choice. With my limited knowledge, these are my choices, in the meantime.

You only get to pics seven candidates. The top three get two points, and the remaining four get one point each. Here is my list:

My choice for chairman is Naftali Bennett.

I have favored current Knesset members, who have already gone through the Knesset "boot camp" and know how to do the job. I have also left out some worthy candidates who are popular and are going to get elected anyway, as well as people who will receive "reserved" spots.

It will be interesting to see how many of my picks receive a realistic spot on the list.

The Jewish Home Primaries: You Get What You Pay For

How much will my vote count. Not as much as I would like, as much of the list has already been determined. This is the way the list will be formed.

Note: In the top 15 spots there are only three open slots. I guess you can't expect too much for 39 NIS!

According to Stephen Sackur's warped logic, the Charlie Hebdo magazine staff are responsible for the murderous attack at their offices. Yehudah Glick puts him in his place. See it at 20:30
Posted by Cosmic X at 10:17 PM No comments:

Interviewed today on the “Galei Yisrael” radio station, Feiglin was asked if he might be interested in running as a candidate in one of the existing faith-based parties that are loyal to the land and heritage of Israel. He replied that he wasn’t interested, that what is important is not the party, rather its vision, and therefore he plans to form his own party.

One has to wonder what he is talking about and why. For nearly twenty years, Feiglin has been endlessly promoting the concept of influencing the political process from within the ruling party, the Likud. Often denouncing the smaller sectarian/nationalistic parties, he boldly proclaimed that he would achieve his national-religious objectives and achieve leadership within the Likud. Not satisfied with simply becoming a member of Knesset and increasing the national-religious membership in a party that was not religious at its ideological core, Feiglin inexplicably declared that he would eventually become the leader of the Likud, and he ran several expensive, but failed campaigns to achieve that objective.

To now establish a new political party and to say that “this is a continuation of the mission” sounds disingenuous and even hypocritical. In the above interview, Feiglin even disparaged those who told him that starting a new political party would split the national-religious vote, even though this is in fact what it would do.

The tragic irony is that the great champion of the “big party system” has taken a 180-degree turn, as a result of his personal failure to get reelected. To his credit, Feiglin’s policy goals have always been serious and consistent, and he has proven himself effective at explaining and getting publicity for those views, but his grand political strategy to change and take over the Likud from within has been a disaster. Despite a slight rightward shift in the composition of the party over the past few years, the Likud has remained basically the same Likud that talks about the land of Israel, yet freezes Jewish building in Judea, Samaria, and Jerusalem; that threatens the Palestinian Authority, yet doesn’t follow through on those threats; that starts wars, but doesn’t follow through or allow the IDF to win decisive victories.

I would like to mention that I know of an important rabbi, who also joined the Likud way back when, perhaps even before Moshe Feiglin, who also thought that the only way to really influence Israeli policy was to be a part of the ruling party.

It seems that politics has little room for ideological purists. If you are not ready to compromise on certain matters you will find yourself in the opposition or outside of the Knesset entirely.

Last night I had the great pleasure of hearing the Deputy Minister of Religious Affairs, Rabbi Eli Ben-Dahan, speak. A whole lot of people crowded into the livingroom of one of my neighbors to hear the rabbi speak. He had plenty to say, explaining his accomplishments as the Deputy Minister of Religious Affairs and the accomplishments of the Jewish Home Party in general. He is definitely going to be one of the people that I will vote for in the primaries.

In an unrelated development, the other day I was in Aminadav, a moshav located west of Jerusalem. The place has a wonderful view of the Judean hills. Click on the pics for an enlargement: 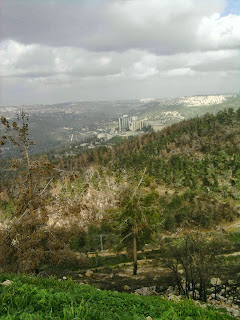 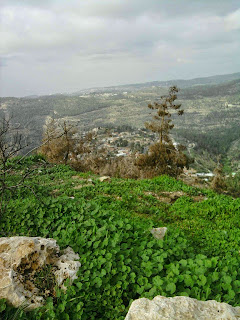 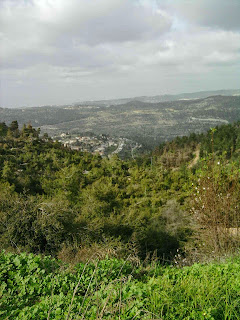 We All Get Another Chance

This proves that you are never too old to rock and roll:
Posted by Cosmic X at 8:26 AM No comments: