This week's edition is being hosted by DovBear.
Posted by Cosmic X at 9:27 PM No comments:

Thoughts on Receiving the Torah

Not too long ago we read the Torah portion "Bechukotai". There we learn that it is not enough to keep the commandments. One must learn Torah with tenacity. That is the gist of Rashi's opening words on the portion:

If you follow My statutes: I might think that this refers to the fulfillment of the commandments. However, when Scripture says, “and observe My commandments,” the fulfillment of the commandments is [already] stated. So what is the meaning of “If you follow My statutes”? It means that you must toil in the study of Torah [for the word for “follow” here, תֵּלֵכוּ, literally means “walk,” which is a strenuous activity (Gur Aryeh)]. — [Torath Kohanim 26:2]

All of the blessings from Above are dependent upon this. Not only that, but when this devotion to Torah learning is lacking, the descent into spiritual oblivion has begun. See what Rashi has to say on Vayikra (26:14-15). An objective look at Jewish history reveals the stark truth of this Divine law. We have to set aside time every day and night for learning. Learning Torah requires great effort, and even affliction. "The Holy One Blessed Be He gave three good gifts to Israel, and all of them He did not give except through affliction, and they are: Torah, and the Land Of Israel, and the World To Come"(Berachot 5A). It is not the same as reading a paperback novel or your favorite blog. According what we put into learning Torah, so is the reward. "According to the suffering is the reward" (Avot end of ch. 5). This can be interpreted as the reward in The World To Come, but it can also be interpreted in more earthly terms. That is to say, you get out of it what you put into it. "The law of the Hashem is perfect, restoring the soul..." (Psalms 19:8) How much the Torah will revive your soul depends on how much time and effort you invest in learning. In general we must remember that the Torah is from Hashem. It is His way of letting us know His will. We pray to Hashem and ask Him for what we need and want. But do we try to understand what He wants from us? "He that turns away his ear from hearing the Torah, even his prayer is an abomination"(Proverbs 28:9). It's a two way street. On this Shavuot holiday, may we all merit to receive the Torah in happiness, and to serve Hashem in happiness. May we all strengthen our commitment to learning and keeping the Torah. May we succeed in learning Torah in depth and in breadth, the written Torah which is the "Torah of truth", and the Oral Torah which is the "eternal life" that Hashem "planted within us" (Shulchan Aruch). And may we purify ourselves and be worthy of learning the secrets of Torah as well.
Posted by Cosmic X at 11:19 AM 1 comment: 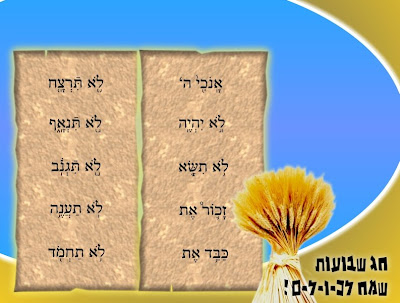 The graphic courtesy of emlking.
Posted by Cosmic X at 9:17 PM 1 comment:

Email ThisBlogThis!Share to TwitterShare to FacebookShare to Pinterest
Labels: Shavuot

The old dull bore,
Came for lunch other day,
With anecdotes galore,
And lots of things to say.

He tried to be polite,
He meant to be magnanimous,
But after one bad-mannered bite,
He was exposed an ignoramus.

He fancied himself a scholar,
He sought to be a sleuth,
And commenced to yell and holler,
With no regard for truth.

Some found this entertaining,
And goaded the old dull bore,
But my interest was waning,
I couldn't help but snore.
Posted by Cosmic X at 4:38 PM 1 comment:

Bring up the monkey,
Give him a bath,
Dress him up funky,
Have a good laugh.

He smiles a nice smile,
He swings and sings,
He's got good style,
And says wonderful things.

Worship the monkey,
Bow down on your knees,
Give him a hug,
And he'll give you the fleas.

You scratch and itch,
You go out of your head,
You believed every pitch,
That the monkey said.

But remember my friend,
He was your creation,
And that in the end,
Is the state of the nation.
Posted by Cosmic X at 4:36 PM No comments:

Benji's got it this week.
Posted by Cosmic X at 4:47 PM No comments: 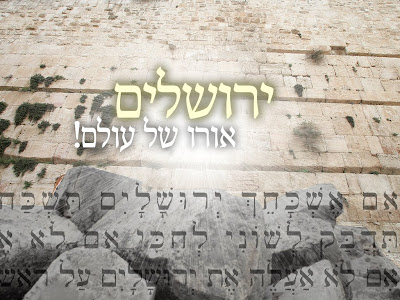 I davenned at Merkaz HaRav tonight. The place was packed. Security was tight because Bibi will be visiting the Yeshiva tonight. I am wondering how he will be received after destroying an outpost this morning. The graphic is from the young artist EMLking.
Posted by Cosmic X at 9:54 PM 4 comments:

The Downfall of Mr. Baiter

The Downfall of Mr. Baiter

Have you met Mr. Baiter?
Dawn caught him crawling out of his crater,
Just like a slimy alligator.

And surrounded by his encampment,
Dissers and dismissers the First Commandment,
He sought to snare Adam through entrapment.

He prayed to catch his prey,
Baiting the banners of both The Jerusalem Post and USA Today,
With wretched, woeful words for the month of May.

After decades of denying Creation's demands,
His mouth opened wide with observations and commands,
A pupil of the one pushed away with two hands.

He believed that his bait was quite enticing,
Since a few foolish fish were furiously biting,
Nevertheless nothing was new or exciting.

Because before the plane hit the Southern Tower,
Mr. Baiter locked my grandfather in the shower,
Then in stealth he went to steal grandma's dower.

And in the midst of all of the violence,
His radio played "The Sound of Silence",
Until six times ten to the sixth were past tense.

And to the chanting of choirs and the clanging of chimes,
Mr. Baiter committed countless crimes,
Never publicized in The New York Times.

The sun is setting for Mr. Baiter,
He slips a tip to his Arabian waiter,
Takes the down escalator and says, "See you later."

Darkness descends upon Mr. Baiter,
We knew that would happen sooner or later,
So the master hater creeps back into his crater.

But upon us a sun of righteousness rises,
Little by little with lots of surprises,
Be strong and patient, that's just the way it is.
Posted by Cosmic X at 5:11 PM 2 comments:

Blood of the Maccabees

This plant is the symbol of Israeli Memorial Day. Among the English names for this plant are "strawflower" or "everlasting". In Hebrew it is call Dam Hamakabim, the Blood of the Maccabees. This is a pic that we took a couple of weeks ago: 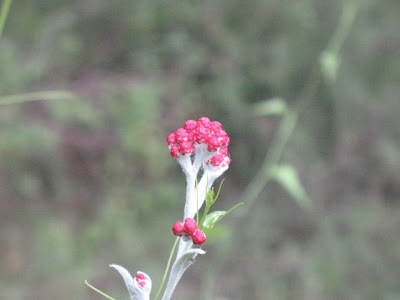 Where's the Pope and What Did He Eat For Breakfast?

One of the generation's greatest Torah luminaries came to visit the United States. Joe Christianson from Smalltown, U.S.A. is following the visit with great curiosity. Will the rabbi visit the tomb of the unknown soldier? Will he embarrass us by visiting inner city slums, illegal immigrants or Jimmy Carter? Joe Christianson is not alone. Many Americans of all faiths are listening, waiting to analyze every word that the holy bearded scholar utters. Tensions are high. Who knows what the rabbi will say?

Of course the story in the previous paragraph was the work of my imagination. It never happened. But I wrote it to make a point. The Pope is here in Israel on a visit, and it is amazing how much attention the press and certain Jewish organizations are giving to everything the man does and says.

Simple, is it not? If so, why are so many finding it so complicated? The answer is that it is much easier to take the Jew out of Golus than to take the Golus out of the Jew.
Posted by Cosmic X at 4:35 PM 1 comment:

Did You Ever See a Hoopoe?

I saw one at Hebrew U. yesterday: 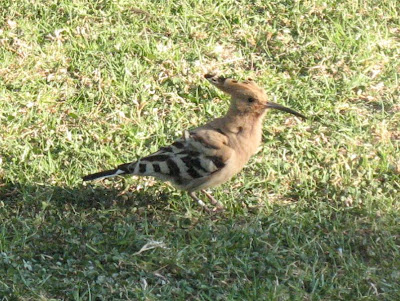 "Duchifat" is the bird's name in Hebrew. It is the State of Israel's national bird. Hoopoe!!!
Posted by Cosmic X at 5:16 PM 6 comments:

I liked this article that was published in the Ma'yanei Yeshua parsha sheet, so I decided to translate it for the English peaking world:

Rabbi Ya'ir Frank gives us 3 tips for surfing the internet safely: before, during, and after. In a world where internet is becoming such a significant part of our lives it is warmly recommended to think about these things and to adopt them:

In order to avoid wasting money, one of the recommendations of the Pa'amonim organization is to go to the store with a shopping list and buy only what is written on it. One who goes shopping without a list will often find himself buying things that he does not really need. Why? Because it was "on sale", or in a pack of five, and it's a shame not to buy...

Therefore, one who enters the internet should have a defined purpose why he is entering, to enter only for that, and to leave. Many times one enters one place, but he finds himself wandering from site to site, and taking everything that is available. And certainly one should not enter the internet for the purpose of wandering about.

2) Prayer before entering the internet

The rabbis said that one entering a city should pray," May it be the will of the Lord my God that you will cause me to enter the city in peace". Why? Because in the city there are various dangers. We have found similar things in relation to one who goes to the bath house, to taking medical cures, and more.

It seems that is our generation one should pray - before entering the internet.(click on the pic to see the prayer in Hebrew) 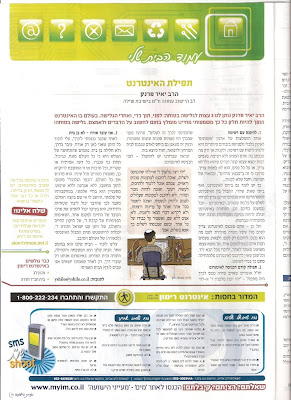 3) I'm a wayfarer here, and not a member of the household

After I have entered the 'city', I must remember that I am only a guest, passing through, and not God forbid a member of the household. Sometimes the web surfer feels that the entire world is under his mouse. Every opinion, be it true or false, and every culture or something that would like to be thought of as such, are presented as equals in front of his eyes. He feels the entire world, the 'global village', is flowing into his computer without discretion and without judgment. He takes interest in the life of Smith and in the thoughts of Jones, who is sitting somewhere at the end of the earth. Beyond the fact this this can create shallowness and superficiality, mainly it can divert the main point life to other vistas. The inner aspirations of being close to God, of repairing life and the world, and the exalted vision of the nation of Israel and God's Torah, can be blurred under the (apparently) infinite flood of the world around us.

We must remember - our home is somewhere else. Our home is the family and the community, the Torah and the Beit Midrash. On the internet we are only wayfarers, and only after we leave it do we return to our true home (page).

Email ThisBlogThis!Share to TwitterShare to FacebookShare to Pinterest
Labels: internet

Facebook is pretty cool, but what in the world is Twitter good for?
Posted by Cosmic X at 9:54 PM 5 comments: