Rabbi Meir Yisrael Lau on the Elections for the Chief Rabbi

Wise words from a wise man(His Shmirat HaLashon is fantastic!):
Posted by Cosmic X at 4:42 PM No comments: 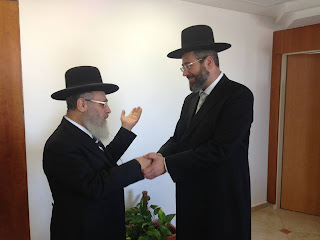 Mazal Tov to them!

Sometimes current events are so maddening that...I just do not know what to say. Is there any point in writing a blog post on why it is wrong to release murderers from prison in order to have the privilege of talking to Abu Mazen?

The second thing is that the United States of America, under Obama and Kerry, is not a friend of Israel.

It is interesting to note that the name Kerry, in Hebrew, means "nocturnal emission", a source of impurity. Need I say any more?

1) This web site is a must! Go ahead click on the link.

Here's a news report about the web site:

3) Eight years have gone by since the destruction of Gush Katif.

This week's Parasha starts out:

These are the words which Moses spoke to all Israel on that side of the Jordan in the desert, in the plain opposite the Red Sea, between Paran and Tofel and Lavan and Hazeroth and Di Zahav.

Since these are words of rebuke and he [Moses] enumerates here all the places where they angered the Omnipresent, therefore it makes no explicit mention of the incidents [in which they transgressed], but rather merely alludes to them, [by mentioning the names of the places] out of respect for Israel (cf. Sifrei).

Rebuke is not an easy matter. Not everybody knows how to rebuke his fellowman in a way that what he says will make a positive impression. Rabbi Akiva said, "I am in doubt if there is anyone in this generation who knows how to give reproof." (Arachin 16B). Rebuking someone by hanging a sign from your balcony seems to me to be a good method. The person is not being attacked personally and he may take the words to heart. Here are some words of rebuke that I have seen recently (click on the pics to enlarge): 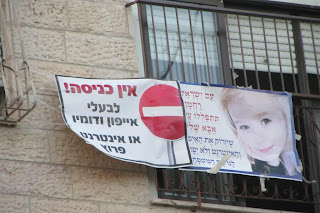 The sign on the left says, "No entrance to owners of iPhones (or similar devices) or unfiltered internet." The second sign says," O merciful nation of Israel! Pray that my father will get rid of the iPhone and the internet and not break up our family." I agree with the signs that iPhones, internet etc. can be dangerous. If you don't believe me, ask Anthony Weiner. 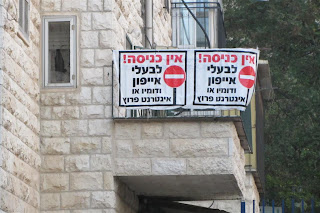 This sign warns in the name of Rabbi Kanievsky that those who have iPhones bring trouble into their homes: 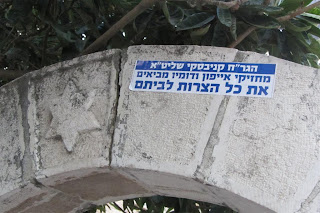 This really does not fit in but I'm including it anyway. The red sign in the middle says, "To the Nations of the world: (from their ambassadors in the land who are closely following the struggle against Judaism in Israel) Jewish Education under Foreign Rule is preferable to Foreign Education under Jewish Rule". 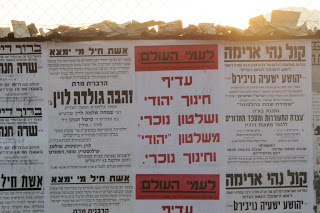 Email ThisBlogThis!Share to TwitterShare to FacebookShare to Pinterest
Labels: Temple

This is great news:

Defense Minister Moshe Yaalon decided Monday to renew the military's cooperation with the Har Bracha yeshiva located in Har Bracha, Samaria. The yeshiva will regain its “hesder” status, thus enabling its students to serve in the special hesder track that combines yeshiva study with army service.

It was the previous defense minister, Ehud Barak, who canceled the hesder arrangement because of statements by the yeshiva dean, Rabbi Eliezer Melamed, against soldiers' participation in the eviction of Jews from their homes.

It pays to stick to one's principles!

Here are some things about this subject that I wrote way back when:

Rabbi Melamed: Standing Courageously for the Truth of Torah

Green search lights shone from the street as fireworks explode in the distance at Tahrir Square in Cairo, Egypt. The main thoroughfare was packed with Egyptians in tense anticipation of the end of the 48-hour deadline the Egyptian military has given for Egyptian president Mohammed Morsi to resign or agree to some sort of compromise.

The cheering of the crowd was constant as various people shout in loudspeakers and blow horns and whistles. Callers exhort the crowd in political chanting. The atmosphere was almost festive, despite the possibility of a bloody civil war. The protests of the past week have resulted in numerous deaths.

Finally, as Wednesday evening dragged on, Egyptian General Abdel Fattah al-Sisi broadcast on national television the removal of President Mohammed Morsi from power. The new interim president is Adly Mansour, who was until now, head of the Supreme Constitutional Court.

The Egyptian army has deployed soldiers around the Presidential compound and army vehicles have been stationed at Tahrir Square as well, although their presence is minimal compared to the mass cheering, flag waving and celebratory fireworks.

Revolution or not, the shameful treatment of women in Egypt continues:
Posted by Cosmic X at 11:04 PM No comments:

Uri Ariel Talks About the Expulsion