Six people have been injured in a stabbing attack at Jerusalem's gay pride march, according to police.

Emergency services say that two of the victims are in "serious" condition.

The stabber - who was arrested at the scene - has been identified as Yishai Shlissel, the man who was jailed for 12 years for stabbing three people at the same march in 2005.

Shlissel had only been released from jail a few weeks ago, after serving the majority of his term.

Several thousand participants at the 13th annual Jerusalem Pride Parade were marching along Keren Hayesod Street when the knifeman apparently broke through a police cordon to attack them.

The annual gay pride march through Jerusalem has been the source of heated controversy, due to the city's holy status to Jews, Christians and Muslims.

Since the 1990s, gay activist groups have held an annual mega-parade in the largely-secular Tel Aviv. However, in 2002 they began holding a smaller, far more contentious march through Jerusalem, amid bitter opposition from the city's largely traditional and religious residents.

Unlike the Tel Aviv event, the Jerusalem march is usually met with loud counter-protests. In 2005 tensions boiled over when a haredi extremist stabbed three participants before being arrested by police.

In recent years, however, protests have been smaller as some haredi leaders urged their followers to stay away from what they term the "abomination parade" altogether.

The fact that these parades are taking place in the holy city of Jerusalem. against the will of the vast majority of its inhabitants, is infuriating. However, to go and stab people...let's just say that it's not a good idea. In fact, gives the organizers of the march exactly what they want: attention. Ten years ago I prescribed the following with regards to this sad event:

My advice to all Jerusalemites is to stay away from the gay parade. There is no reason to go there and protest against the deviants. That is exactly what the organizers of the provocation desire. Instead, stay at home or go to the synagogue and do what we do best: pray.

It is interesting to note that the area which the march took place in, downtown Jerusalem, is slowly but surely turning ultra-Orthodox.
Posted by Cosmic X at 11:18 AM No comments:

Not exactly. He will be released from jail but will not be allowed to leave the United States for five years. It looks like Obama and Kerry finally played the Pollard card to draw attention away from the scandalous deal with Iran. It ain't gonna work!
Posted by Cosmic X at 11:03 PM No comments:

What happens if you say Shema Yisrael on the Temple Mount?
Posted by Cosmic X at 3:34 PM No comments:

Ben Shapiro: It's Not Rude to Say That Someone Who is Biologically a Male is a Male

Ben is an island of clarity in a sea of stupidity:

And BTW, if this Zoey character wants to be a woman, the least he can do is be shomer negiah!

The Battle of Beaumont

Every battle has a start,
But there are some battles that never end,
And so was the Battle of Beaumont.

The deadly enemy was indeed daring and formidable,
But absolutley not invincible,
In the Battle of Beaumont.

Somewhere, somehow the Book of War was forgotten,
Along with the Tree of Life,
During the Battle of Beaumont.

And after years of struggle,
From all its lofty heights,
Beaumont plunged to the deepest deaths.

O keyboard warrior, master of cut and paste
Spare me your haughtiness,
As you stare at this destruction made public.


Faith and Wisdom,
Prayer, prayer, and more prayer,
And your camp shall be holy.

Email ThisBlogThis!Share to TwitterShare to FacebookShare to Pinterest
Labels: aliyah

About three and a half years ago "Orot Eliyahu" was born:

A new mehadrin, super-kosher kashrut authority was launched this week from Safed, targeting the national-religious community.

The more discerning members of the crocheted kippa-wearing public will be now able to purchase fresh poultry slaughtered under the auspices of the Badatz Orot Eliyahu authority.

Badatz Orot Eliyahu is the brainchild of Rabbi Shmuel Eliyahu, chief rabbi of Safed, and Rabbi Ezra Sheinberg, dean of the Orot Ha’ari yeshiva in Safed.

The birds will be slaughtered in accordance with the rulings of former Sephardi chief rabbi Mordechai Eliyahu, father of Shmuel, after whom the new authority is named. The nationalreligious Badatz stamp will apply to beef in the coming months. 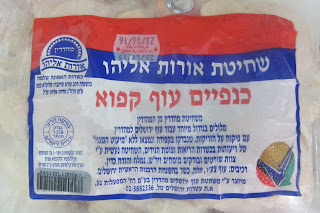 However, starting from today, 1 Av, Rabbi Shmuel Eliyahu has nothing to do with "Orot Eliyahu".

I saw something interesting today in SCOTUS Justice Clarence Thomas' dissenting opinion on the OBERGEFELL v. HODGES case. This is what he wrote:

Perhaps recognizing that these cases do not actually involve liberty as it has been understood, the majority goes to great lengths to assert that its decision will advance the “dignity” of same-sex couples.The flaw in that reasoning, of course, is that the Constitution contains no “dignity” Clause, and even if it did, the government would be incapable of bestowing dignity.

Human dignity has long been understood in this country to be innate. When the Framers proclaimed in the Declaration of Independence that “all men are created equal” and “endowed by their Creator with certain unalienable Rights,” they referred to a vision of mankind in which all humans are created in the image of God and therefore of inherent worth. That vision is the foundation upon which this Nation was built.

This reminded of one of Rabbi Kook's ideas:

The difference between a slave and a free person is not merely a matter of social position. We can find an enlightened slave whose spirit is free, and a free man with the mentality of a slave.

True freedom is that uplifted spirit by which the individual — as well as the nation as a whole — is inspired to remain faithful to his inner essence, to the spiritual attribute of the Divine image within him. It is that quality which enables us to feel that our life has value and meaning.

A person with a slave mentality lives his life and harbors emotions that are rooted, not in his own essential spiritual nature, but in that which is attractive and good in the eyes of others. In this way, he is ruled by others, whether physically or by social conventions.

Vanquished in exile, we were oppressed for hundreds of years by cruel masters. But our inner soul is imbued with the spirit of freedom. Were it not for the wondrous gift of the Torah, bestowed upon us when we left Egypt to eternal freedom, the long exile would have reduced our spirits to the mindset of a slave. But on the festival of freedom, we openly demonstrate that we feel ourselves to be free in our very essence. Our lofty yearnings for that which is good and holy are a genuine reflection of our essential nature.

Do you think that Justice Thomas is familiar with Rabbi Kook's writings?
Posted by Cosmic X at 9:49 AM No comments:

It's Time for Jews to Leave the U.S.A. for Israel

I really do think that the time has arrived. Actually, the minute that it was possible to get on a plane or a boat and come to Israel, almost every Jew that puts spirituality before materialism should have gotten up and left. But in light of the decision of the SCOTUS regarding so called "marriage equality" a decision which flies in the face of the Seven Noahide Laws, all 50 states are obligated to tolerate and facilitate this abomination. Even though the gentiles have not been diligent in keeping the Noahide Statutes (see Bava Kama 38A), this decision, as I wrote, is particularly anti-Noahide and as such anti-God.

Now that evil rules from sea to shining sea (along with Hawaii and Alaska), it is worthwhile reviewing the words of our great master and teacher, Maimonides:

It is natural for a man's character and actions to be influenced by his friends and associates and for him to follow the local norms of behavior. Therefore, he should associate with the righteous and be constantly in the company of the wise, so as to learn from their deeds. Conversely, he should keep away from the wicked who walk in darkness, so as not to learn from their deeds.

This is [implied by] Solomon's statement (Proverbs 13:20): "He who walks with the wise will become wise, while one who associates with fools will suffer." Similarly, [Psalms 1:1] states: "Happy is the man who has not followed the advice of the wicked."

If all the places with which he is familiar and of which he hears reports follow improper paths, as in our times, or if he is unable to move to a place where the patterns of behavior are proper, because of [the presence of] bands of raiding troops, or for health reasons, he should remain alone in seclusion as [Eichah 3:28] states: "Let him sit alone and be silent."

If they are wicked and sinful and do not allow him to reside there unless he mingle with them and follow their evil behavior, he should go out to caves, thickets, and deserts [rather than] follow the paths of sinners as [Jeremiah 9:1] states: "Who will give me a lodging place for wayfarers, in the desert."

There are many righteous gentiles in the United States who deplore this decision. My heart is with them, and I hope that they will be able to remove this blight from their nation. As for those Jews that are still loyal to God's Torah, I ask, what more has to happen to make them abandon the fleshpots? As for those Jews of the SCOTUS that contributed to this scandalous decision, I bring a verse from the prophet Malachi,

"For, behold, the day cometh, it burneth as a furnace; and all the proud, and all that work wickedness, shall be stubble; and the day that cometh shall set them ablaze, saith the LORD of hosts, that it shall leave them neither root nor branch."

In order to end on a good note, here is the continuation of that prophecy:

"But unto you that fear My name shall the sun of righteousness arise with healing in its wings; and ye shall go forth, and gambol as calves of the stall. And ye shall tread down the wicked; for they shall be ashes under the soles of your feet in the day that I do make, saith the LORD of hosts."