Israel’s ninth President and former Prime Minister Shimon Peres has passed away at the age of 93, two weeks after suffering a serious stroke and being admitted to the Tel Hashomer Hospital.

Mr. Peres was often the object of my blogging wrath. Now he will stand before the Divine Judge, who will weigh his merits and other deeds much better than a blogger.

I wonder what Peres was thinking as death approached. I cannot help but think of what is written in Berachot 28b:

When Rav Yochanan ben Zakkai was on his death bed, his students came in to visit him. When he saw them, he began to cry. The disciples asked him, "Candle of Israel, the right hand pillar, the mighty hammer, why are you crying?" Rav Yochanan ben Zakkai responded, "If I were being taken before an earthly king who is here today and tomorrow in the grave, whose anger is not a permanent anger and who if he imprisons me it will not be a permanent imprisonment, and I might be able to appease him with words or bribe him with money – would I not anyhow cry in fear? Now I am being taken before the King of Kings, the Holy One Blessed is He who is eternal. If He is angry with me, it will be an eternal anger and if He imprisons me, it will be an eternal imprisonment. If He kills me, it will be an eternal death. I cannot appease Him or bribe Him. Not only that, but I have two paths before me – one leading to Gan Eden and one leading to Gehinnom and I do not know on which path they are taking me. Should I not cry?"

May his friends and loved ones find comfort, and may we all be written and sealed for a good year.
Posted by Cosmic X at 9:04 AM 1 comment:

Everything is Fine, Mom!

A short film from Tzvi Fishman with English subtitles:
Posted by Cosmic X at 2:41 PM No comments:

From an interesting interview with his son, Elisha Wiesel:

My dad had an enormous amount of confidence in me, even though at times it might have seemed somewhat misplaced for where I was in life. He really only had two rules for me growing up. One he gave me early, and one he gave me later. The rule he gave me earlier was that I could do anything I wanted in life. It didn’t matter what profession I picked, the only thing that mattered to him was that my wife was to be Jewish (whether through birth or conversion he didn’t care). That was really the only ground rule I had with him for the first few decades of my life. I could do what I wanted and explore different things. I remember I came home from college with a purple mohawk my freshman year, and my dad was not fazed. He said, “I love you, and I would walk down the street with you any time, anywhere. I am not embarrassed. I would take you to shul like this and out to dinner. I love you. You are my son. You can do anything you want as long as you marry Jewish.”

And then there is this:

Intermarriage was at the top of the list (of challenges facing Jews today -CX). He saw intermarriage and assimilation as very significant threats to the Jewish people. He always felt he was at a crux because he was at the end of a line. It was his job to continue it and to make sure that he was not the last. He felt a connection to the fact that for thousands of years, Jews had been transmitting information down the generations in a certain way with certain values. I think he was very concerned that the line would end with him.

It is with great sadness that I heard about the passing of Rabbi Shaar Yashuv Cohen:

Rabbi Eliyahu Yosef Shaar Yashuv Cohen, the Chief Rabbi of Haifa, passed away Friday night at the age of 89.

A noted scholar and veteran from the War of Independence, Rabbi Cohen was a leading rabbinic figure in the National Religious community, with more than 40 years of public service, including more than 30 years as Chief Rabbi of Haifa and 36 years as chief of the local rabbinical court.

Here's a picture that I took of the Rabbi exactly six years ago, on the third of Elul, the yahrzeit of Rav Avraham Yitzchak HaCohen Kook. : 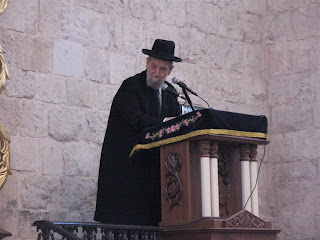 Eulogies at the Merkav HaRav Yeshiva:

The Holy City of Ashdod

What a beautiful city! 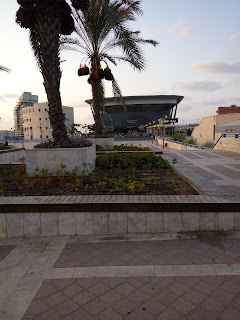 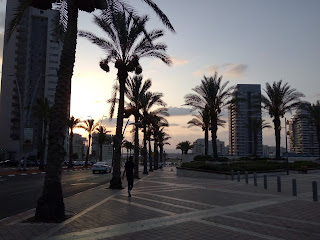