Here is an ecellent web sites for those of you who really want to delve into the results of the last Israeli elections. In addtion to seeing the results on a national level, you can also see breakdowns according to city/town and polling booth.

Did you know that one person voted for the "Brit Olam" party in all of Ofakim? Are you surprised that Shas got 6% of the vote in Abu Ghosh? Or that the "Bayit HaYehudi" got 16% of Sde Boker's votes? How about Otzmat Yisrael getting 14% of the vote in Immanuel?

It is interesting to compare communities that are geographically close but very different socio-economically, for instance, Savyon vs. Or Yehudah. Another example B'nei Brak vs. Ramat Gan.

Anyway, you can waste a lot of time querying the data base over there, just like I did!

Interview With Yoni Shetbon From "The Jewish Home" Party

Here is an interview with another rookie MK (in Hebrew with French subtitles):
Posted by Cosmic X at 11:04 AM No comments:

This guy will be the first U.S. born Knesset member since Rabbi Kahane.
Posted by Cosmic X at 7:18 PM No comments: 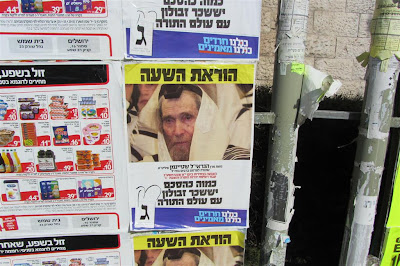 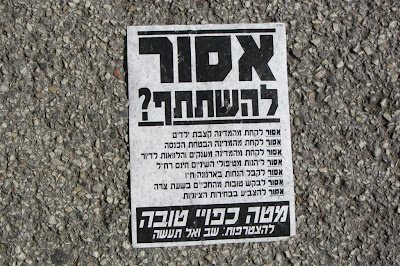 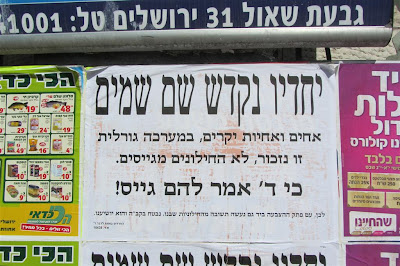 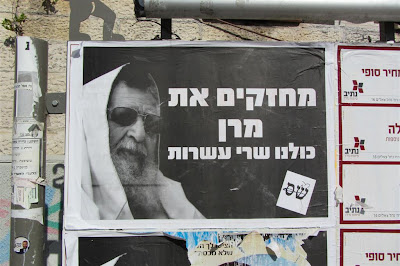 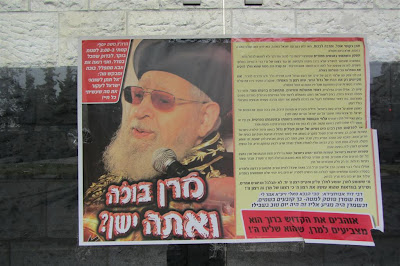 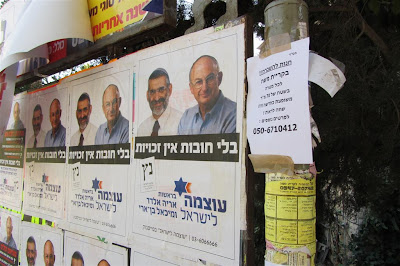 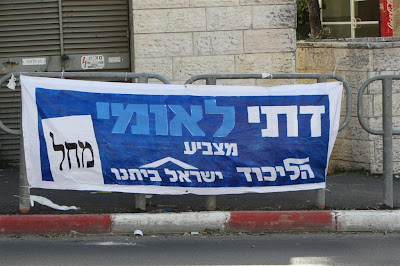 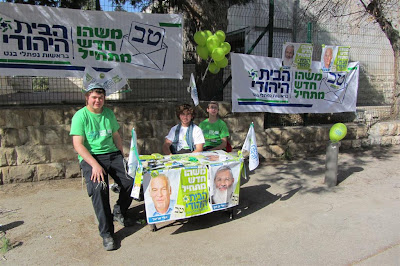 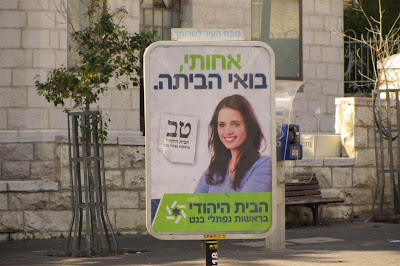 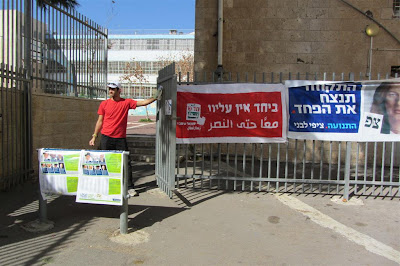 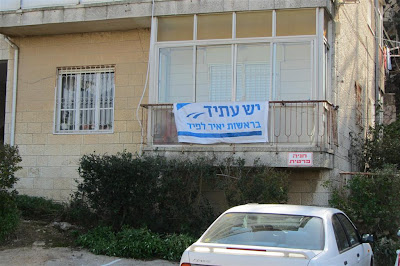 Why I'm Voting For "The Jewish Home" Party

Thank God, there are many worthy parties and people running for the Knesset, the Israeli parliament. So why am I voting for "The Jewish Home" party? There are several reasons. I'll try to spell them out.

1) Achdut (Unity): The combination of "Tekuma" and the "HaBayit HaYehudi" was and is no simple matter. The fact that they were able to unite for the common good is a good sign.

2) Naftali Bennett: Is he the Messiah? I don't think so, but he is a breath of fresh air. He is a proven leader on the battlefield and in the office. He conducted a clean and positive campaign. He stood behind the people on his list when they came under attack. He is, like the campaign says, a brother (ach).

He realizes that there will not be peace with the so called "Palestinians". He knows how to speak to the English speaking press. He is such a contrast to all of those Israeli leaders who are always occupied with how to please Abu Mazen.

Check out this interview. It is incredible. Here Naftali does more for Sabbath observance than a thousand demonstrations:

He realizes that there will not be peace with the so called "Palestinians".

3) The rest of the list: The Jewish Home list is diverse, full of ideological people who have already served the public in many ways.

I hope I can read this post a year from now and be proud that I voted for "The Jewish Home" party.

This guy doesn't let the interviewer bully him around. Love it!
Posted by Cosmic X at 6:29 PM No comments:

If Rabbi Gimpel makes it in he will be the first MK born in the USA since Rabbi Meir Kahane:
Posted by Cosmic X at 6:14 PM No comments:

I think that this guy would make an would make an excellent Rav Ir or Rosh Yeshiva. He seems to be too nice for politics. In any case I wish him much success:
Posted by Cosmic X at 10:13 PM No comments:

I do not know what Jeffrey Goldberg was thinking. Was he just "reporting the news", or was he intentionally trying to meddle in Israeli politics and harm Benjamin Netanyahu's elecion campaign? The impression here is that Goldberg was doing Obama's bidding, serving as his "Shofar".

In any case, President Obama is not popular here in Israel. He is seen as someone who seems to be stuck in some kind of leftist academic fantasy, unable to grasp the realities of the Middle East. Remember, 85% of the ex-pats here in Israel who voted in the U.S. presidiential elections voted for Romney. I do not have current data, but I estimate that Obama's popularity among the general population in Israel is even less.

With this in mind, Obama's comments crticizing Netanyahu and his policies will only serve to strengthen the prime minister, and those to the right of him, among the elctorate here in Israel.

Mordechai Kedar: The State of the Jewish Brotherhood

Truth sprouts up from the land!:

The reasons for the concern are deeper than this, and stem from the cultural mindset of the region. An Israel that has a strong character and is confident of itself and the justice of its cause, might stop behaving like a dishrag, as it has done in the past, more than once, under the irresponsible leadership of the bleeding hearts who are the "Pursuers of Peace", and might adopt a pattern of behavior typical to the Middle East. More than a few Israeli politicians, some of them prime ministers, who sought "a solution now" have earned for Israel the image of "peace seekers", according to their point of view, but which the Middle East understood as "Obsequious beggars pleading for a little peace and quiet". In the Middle East only the vanquished, pleading for his life to be spared, begs for peace, and usually he will get a big, strong kick that will hurl him all the way down the stairs. Peace is the last thing you get when you beg for it.

Amazing! We've had such an abundance of rain lately and now snow! (Click on the pics to enlarge.) 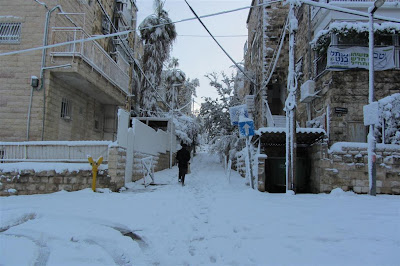 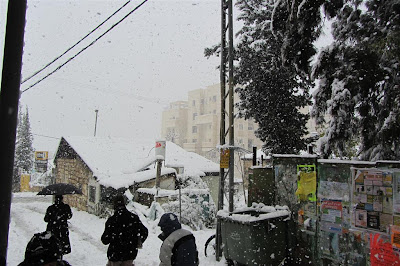 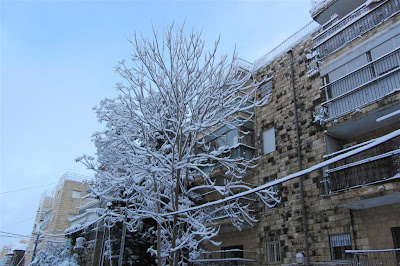 Israeli Elections: The Power to Influence

Here's a message from Rabbi Amnon Yitzchak's party, HaKoach Lehaspia (the power to influence):
Posted by Cosmic X at 5:03 PM No comments:

Israeli Elections: Where is My Polling Station (Kalpi)?

Usually, I receive a notice in the mail telling me where my kalpi is. So far, I haven't received it. I don't know if the mailman did not deliver it or if someone in my household decided to file it in the verticle file.

Anyway, if you do not know where your kalpi is you can find out here.

If You Don't Vote, Don't Complain

It looks like the surprise of this year's elections is going to be the Jewish Home party under the leadership of Naftali Bennett. I thought that I would post a few interesting videos of Jewish Home candidates.

In this video, Naftali Bennett squares off against Tzippi Livni. It's in Hebrew (LOL at what Bennett says at 6:50. He's talking about this guy. Bennett also puts Livni in her place at 7:50.):

Jeremy Gimpel vs. Limor Livnat (Rabbi Gimpel has a good chance of making it into the Knesset according to the latest polls):

"Now there arose a new king over Egypt..."

Who Should I Vote For?

If you are not sure who to vote for in the upcoming elections here in Israel, check out The 2013 Israeli Election Compass. Even if you know who you want to vote for this web site is very informative.
Posted by Cosmic X at 4:24 PM No comments: