The memory of the Rav, his Torah, good deeds, and piety, will last long after the mourning notices wither and fade away. 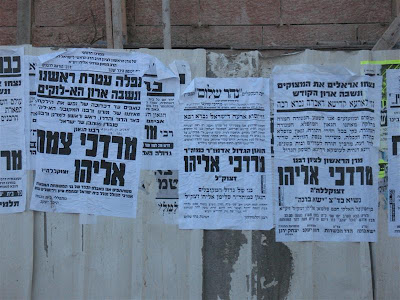 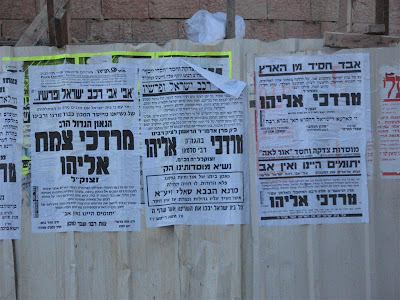 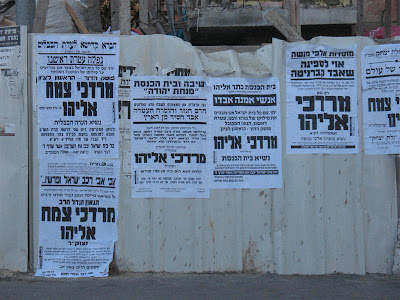 Last night myriads of mourners packed Reines Street in Kiryat Moshe/Givat Shaul. Some of them were fortunate to be right in front of Rabbi Mordechai Eliyahu's synagogue. They were able to see those delivering the eulogies. I was not among them. I showed up early for the funeral, but not early enough. Reines Street was already packed with a diverse group of people that came to pay their last respects to one of the greatest rabbis of our generation.

Like I said, it was a diverse group: National religious, "Lithuanians", Hasidim, Sephardim, traditional and even secular Jews were there. The Rabbi was a not only a great Torah scholar of great piety and a wise man, he was also a unifying force in the nation, respected by all.

He loved the nation, and the nation loved him! He was accessible. Anyone who had a question could visit him in his office. You could also catch him on Fridays outside of the Mikvah building. People would wait for him there to ask him questions after his pre-Sabbath immersion. On Sabbath you could catch him on his way back from the synagogue. On such occasions he was surrounded by admirers anxious to ask a question or to hear whatever the rabbi was saying.

Rabbi Eliayahu also made his voice heard with regards to another injustice: the continuing incarceration of Jonathan Pollard. Pollard found in Rabbi Eliyahu a spiritual leader and a source of hope.

Our neighborhood was blessed by three giants of Torah: HaRav Shaul Yisraeli zt"l, HaRav Avraham Shapira zt"l and HaRav Mordechai Eliyahu zt"l. All of them were rabbinical court judges and respected authorities of Jewish law. They are gone and they have no replacement!
Posted by Cosmic X at 4:33 PM 1 comment:

He was a great Rabbi, may his memory be a blessing:

Just as Jews around the country were preparing to gather to pray for Rabbi Mordechai Eliyahu, word of his death arrived.

Earlier in the afternoon, it was reported that his medical condition had severely deteriorated, and that prayers were sought.

Rabbi Eliyahu was the spiritual leader of much of the religious-Zionist sector. Hospitalized for nearly a year in Shaarei Zedek Medical Center in Jerusalem, his condition was downgraded today to "critical,” and not for the first time. Family members were called to his bedside, and were by his side when he passed away.

No word on funeral arrangements has yet been announced.

The sage was in poor and very painful condition for several months. Two weeks ago, tens of thousands of people gathered in three different locations to pray for Rabbi Eliyahu’s health, following a similar deterioration.

His son, Tzfat’s Chief Rabbi Shmuel Eliyahu, told Arutz-7’s “Preparing for Redemption” radio program at that time, “The situation is not good. Ever since last Elul [August], the rabbi has been in the emergency room, and is undergoing terrible suffering. The very fact of his long hospitalization leads to a slow deterioration; sores open, close, open... things are going backward instead of forward.”

Rabbi Mordechai Eliyahu was born in 1929 in the Old City of Jerusalem; his mother was a granddaughter of the famed Ben Ish Chai. He served as Israel’s Chief Sephardic Rabbi - the Rishon LeTzion – from 1983 until 1993, together with the late Rabbi Avraham Shapira, and the two continued for years afterwards to lead the national-religious public in matters of Jewish Law and thought. He authored several works on both.