Traditional Shas supporters are also divided between Shas and Rabbi Mazuz's "Together - The Nation is With Us" party.

Among the Ashkenazi ultra-Orthodox, the "Jerusalem faction" is threatening to boycott the elections, which could cost Agudat Yisrael a seat.

There is very few signs of excitement about the upcoming elections on the street. Although there is a lot of activity on the internet, there are very few signs hanging from the balconies. It could be that people are not interested in being associated with the current divides in the community. Alternatively, it could be that people just don't have the time or strength to invest in this election, which is coming just two years after the previous one.

Email ThisBlogThis!Share to TwitterShare to FacebookShare to Pinterest
Labels: Jewish Home Party, national religious, Together - The Nation is With Us, ultra-Orthodox

Quote of the Day, "I'm a Proud Homophobe"

The quote of the day was uttered by Bezalel Smotrich, number 8 on the Jewish Home list IDF Radio reports:

It is permissable for anybody to decide that he does not want to live a normal life, it is his full right. It is not his right, just because he does not feel comfortable to be abnormal, to demand from us all to undermine the concept of norm and to say there is no such thing as normal already...Every person in his home is allowed to be abnormal and to establish any kind of family unit that he wants. He cannot demand (recognition) from me as a state, and this is where it starts. He feels uncomfortable to be an exception, it is not fun."

Upon hearing these things someone in the crowd shouted, "You dark homophobe, my brother is not an animal, my friends are not animals." Smotrich replied, "I'm a proud homophobe!"
Posted by Cosmic X at 5:56 PM 2 comments: 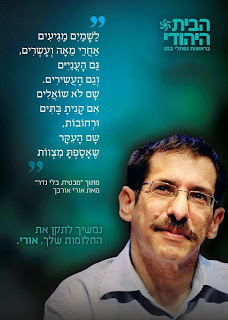 The rich and the poor

All go to heaven

There they do not ask

If you bought houses or streets.

There the main thing is if you gathered mitzvot.

I don't associate the month of Adar with snow. But here we are in Jerusalem, Rosh Chodesh Adar, covered with the white stuff. 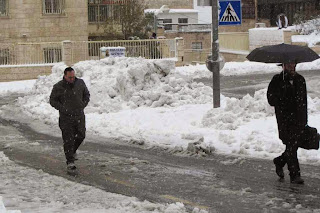 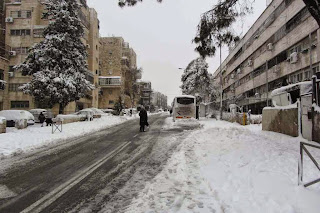 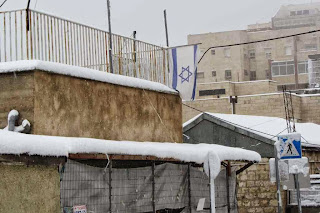 Adelle Biton, the four-year-old terror victim who two years ago miraculously survived a rock attack which left her with severe neurological damage, passed away on Tuesday after her condition deteriorated rapidly from a bout of pneumonia.

She was admitted earlier this week to Schneider Children's Hospital in Petah Tikva for treatment, and on Tuesday it was revealed that she had been put in intensive care.

"With great sorrow we report the death of Adelle Biton who despite the efforts of the doctors passed away roughly an hour ago," stated the hospital on Tuesday. "Our condolences to the family."

Condolences to the Biton family, who sanctified God's name with their unwavering faith:
Posted by Cosmic X at 6:38 PM No comments:

What Does Debbie Wasserman Schultz Really Think About Intermarriage?

I, for one, am confused. First there was this:

Intermarriage is a problem. Then we have this:

At an annual Jewish community event in my congressional district, I spoke about my personal connection to Judaism and in a larger context about the loss of Jewish identity and the importance of connecting younger generations to the institutions and values that make up our community. I do not oppose intermarriage; in fact, members of my family, including my husband, are a product of it.

So Wasserman-Schultz does not oppose intermarriage, even though it is a problem. Do you see the logic here? I don't.

The real problem here is not whether Debbie Wasserman Schultz opposes intermarriage or does not. The real problem is that most American Jews have no idea what being Jewish is all about. They are unaware of our role in the world, that of being a "kingdom of priests, and a holy nation." They replace our dedication to God and His laws with loyalty to the Democratic Party, its platform and "social issues". And when our real goal is missing, when being Jewish has been stripped of its original and genuine meaning, there really is no reason to be Jewish, to separate yourself from the rest of the world.

Yitzhak Herzog's #EpicFail or "Let not him that girdeth on his armour boast himself as he that putteth it off."

Who remembers the quote from the title of this post? Here is the context:

1 And Ben-hadad the king of Aram gathered all his host together; and there were thirty and two kings with him, and horses and chariots; and he went up and besieged Samaria, and fought against it. 2 And he sent messengers to Ahab king of Israel, into the city, 3 and said unto him: 'Thus saith Ben-hadad: Thy silver and thy gold is mine; thy wives also and thy children, even the goodliest, are mine.' 4 And the king of Israel answered and said: 'It is according to thy saying, my lord, O king: I am thine, and all that I have.' 5 And the messengers came again, and said: 'Thus speaketh Ben-hadad, saying: I sent indeed unto thee, saying: Thou shalt deliver me thy silver, and thy gold, and thy wives, and thy children; 6 but I will send my servants unto thee tomorrow about this time, and they shall search thy house, and the houses of thy servants; and it shall be, that whatsoever is pleasant in thine eyes, they shall put it in their hand, and take it away.' 7 Then the king of Israel called all the elders of the land, and said: 'Mark, I pray you, and see how this man seeketh mischief; for he sent unto me for my wives, and for my children, and for my silver, and for my gold; and I denied him not.' 8 And all the elders and all the people said unto him: 'Hearken thou not, neither consent.' 9 Wherefore he said unto the messengers of Ben-hadad: 'Tell my lord the king: All that thou didst send for to thy servant at the first I will do; but this thing I may not do.' And the messengers departed, and brought him back word. 10 And Ben-hadad sent unto him, and said: 'The gods do so unto me, and more also, if the dust of Samaria shall suffice for handfuls for all the people that follow me.' 11 And the king of Israel answered and said: 'Tell him: Let not him that girdeth on his armour boast himself as he that putteth it off.'

Ben-hadad, the king of Aram, threatens Ahab the king of Israel, bragging about the multitude of soldiers that he has. Ahab answers him, "Let not him that girdeth on his armour boast himself as he that putteth it off," that is to say, a soldier putting on his battle gear should not boast as one who has already returned victorious from battle. Stop bragging until you do something that you can brag about.

Yitzhak Herzog, who fancies himself as the next Prime Minister of Israel, in an act of utter cluelessness, quotes the verse and then proceeds to brag about how he is going to win the election.

"I plan to defeat Netanyahu, I'll form the next government, and it will be the beast government for Israel," boasted Herzog."

As the rabbis said, "Silence is good for the wise, and all the more so for the foolish!"

I saw this here: 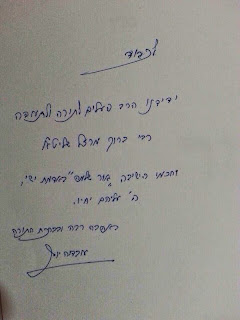 If I am correct, the letter is in support of the Kolel which was set up in the house of Rabbi Shlomo Ra'anan zt"l after he was murdered by an Arab in Hebron.