Preparing to Receive the Torah

Here are some thoughts on the upcoming holiday of Shavuot that I heard/learned from others:

Tonight is the night that we will complete the counting of the Omer. But it is not enough to count the Omer. You have to make the Omer count! The period between Peisach and Shavuot is a time that one should prepare himself to receive the Torah.

The Torah that we learn, the Mitzvot that we perform, and the acts of loving kindness that we do are like glue that help us to cling to the Creator. If you want to glue two surfaces together, you have to make sure that they are clean before you apply the glue. Dirt will prevent the glue from sticking. Similarly, if we want to cling to God, we have to clean ourselves from transgression.

Humility is also a precondtion to receive the Torah. The Torah is compared to water. Just like water always flows to lower places, the Torah is acquired only by those who are humble.

The Redemption Comes Little By Little

This is a good thing to remember today, the 48th anniversary of the liberation of East Jerusalem and the reunification of our holy city. Things are happening here, but one needs to be sensitive to notice. Here is an example: 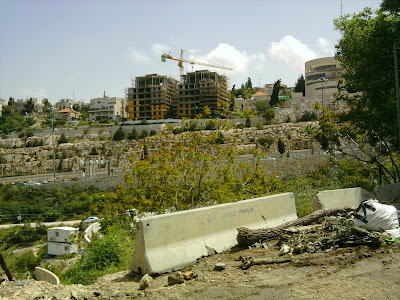 This a picture I took not too long ago of the Romema neighborhood near the western entrance to Jerusalem. Do you see what I see? Two new apartment buildings being built where previously smaller structures previously existed, if my memory is correct. Jerusalem's population continues to grow. The old vessels are simply too small to contain the blessing! Bigger ones are being built all over. Little by little the redemption is taking place before our eyes. But to see it, your eyes have to be open. 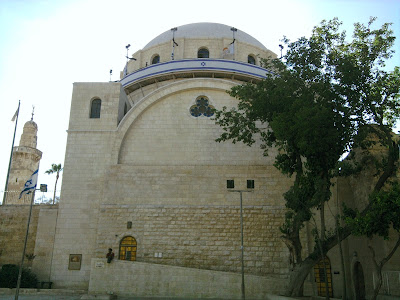 Recently I came accross the following article by a fellow who goes by the name of David Suissa:

With the Celebrate Israel Festival coming up this Sunday at Rancho Park, I thought it’d be an ideal time to write a love letter expressing my unabashed and unconditional attachment to Israel. But as much as I’d still like to do that, that column will have to wait for another week, because right now my mind is too upset about something that happened recently in the holy land.

It’s a little story that barely made the news, but it speaks to a growing cancer inside the Jewish state, the cancer of religious intolerance.

I smell somebody with an axe to grind! The article continues:

It was brought to my attention two weeks ago when I had lunch with Yitzhar Hess, who runs the Masorti (Conservative) movement in Israel.

In a nutshell, this is what happened: A Charedi mayor of an Israeli town decided to cancel a planned bar mitzvah ceremony for four boys with autism because the ceremony would be taking place in a Conservative, rather than an Orthodox, synagogue.

This special program for boys and girls was launched about 20 years ago by the Masorti movement, and it was introduced last year to the Lotem School in Rehovot, a school run by the municipality that accepts special-needs children from all religious backgrounds. Masorti trains the kids for months in preparation for the big day when they are called to the Torah.

Most of the kids trained in the program have severe autism, so the program developed creative ways to help them recite blessings, such as by pressing buttons on a tablet that plays a recording of the individual blessings. Needless to say, being able to have such a ceremony is an incredibly moving experience for the kids and their families.

But in Rehovot this year, just days before the ceremony was scheduled to take place, the mayor, Rahamim Malul, cancelled it by prohibiting the staff at the school from participating in the event. According to Hess, it was a chain reaction that began when a Charedi mother at the school (who did not have a child in the Bar-Bat Mitzvah program) complained to the Charedi head rabbi of Rehovot (Rabbi Simcha Hakohen Kook) who called Charedi MK Meir Porush (United Torah Judaism) who then called Malul.

Through the wonders of Google I was able to find the other side of the story (in Hebrew). It turns out, according to the Rehovot Municipality, that we are dealing with a case of anti-religious coercion. The school in question provides education to children with special needs from Rehovot and its surroundings. The students in the school in question come from secular, religious, and ultra-Orthodox homes. There were parents that objected to this "Bar Mitzvah" ceremony taking place in a non-Orthodox synagogue, as this would prevent their children from participating. A meeting was held where it was agreed to by all the parties involved, including the parents and representatives of the Conservative Movement, that the ceremony would take place in a synagogue that is located inside one of the city's schools. The CEO of the Conservative Movement in Israel rejected the compromise that was reached.

That's the story in a nutshell. If there is a party-pooper here, it is the CEO of the Conservative Movement in Israel. Chazak Uvaruch to Rahamim Malul, the mayor of Rehovot, and to the parents to standing up to such coercion.

As an aside, it's no secret that the Conservative Movement is imploding in the United States. They are not having too much success here in Israel either, and that's an understatement.

An additional aside: Apparently the rabbi of the Conservative synagogue where the ceremony was supposed to take place is openly gay.

This case is a typical example of why one should here both sides of the story before forming an opinion.

There is No Palestinian People

Azmi Bishara admitting that there is no Palestinian People:
Posted by Cosmic X at 10:15 AM No comments:

Email ThisBlogThis!Share to TwitterShare to FacebookShare to Pinterest
Labels: Arabs