Agriculture - One of the State of Israel's Greatest Accomplishments

One of the curses of the exile was that the fertile land of Israel, "a land flowing with milk and honey", would become desolate:

And I will bring the land into desolation; and your enemies that dwell therein shall be astonished at it.

American author Mark Twain notes the following during his travels in the Holy Land about 140 years ago:

There is not a solitary village throughout its whole extent -- not for thirty miles in either direction. There are two or three small clusters of Bedouin tents, but not a single permanent habitation. One may ride ten miles, hereabouts, and not see ten human beings.

To this region one of the prophecies is applied:

"I will bring the land into desolation; and your enemies which dwell therein shall be astonished at it. And I will scatter you among the heathen, and I will draw out a sword after you; and your land shall be desolate and your cities waste."

No man can stand here by deserted Ain Mellahah and say the prophecy has not been fulfilled.

Behind this Divine curse there is also a blessing as our sages noted:

The verse (Leviticus 26:32) states: "And I shall make the land desolate." This is in fact a positive attribute, whose purpose is to prevent the Jewish people from saying: "We have been exiled from our land and our enemies will come and find satisfaction there." As the verse (ibid.) states: "And your enemies who dwell in it will find it desolate" - even the enemies who come after [Israel had been exiled] will find no satisfaction there. (Midrash Sifri - Bechukosai)

And the fact is that no other nation successfully settled the land until we, the Jewish People, came back home. The success of Israeli agriculture is stunning:

In monetary terms, Israel produces almost 70% of all its food requirements. It imports much of its grain, oilseeds, meat and fish, and its the sugar, coffee and cocoa. However, these imports are offset by exports of agricultural produce valued at around $800 million and $600 million worth of processed foods per annum. Today, just under a quarter of the income of Israel's farmers derives from the export of fresh produce, including items such as flowers, avocados, out-of-season vegetables and certain exotic fruits grown for export. In 1996 some 140,000 tons of fruit and vegetables - 14 percent of the entire crop - were sold to factories for processing and export.

This is a far cry from the situation a century ago. When Jews began resettling their historic homeland in the late 19th century, their first efforts were directed towards reclaiming the mostly semi-arid land, much of which was rendered untillable by deforestation, soil erosion and neglect. Rocky fields were cleared and terraces built in the hilly regions; swampland was drained, and systematic reforestation begun; soil erosion was counteracted, and salty land washed to reduce soil salinity.

Since Israel attained its independence in 1948, the total area under cultivation has increased from 165,000 ha. to some 435,000 ha. and the number of agricultural communities has grown from 400 to 900 (including 136 Arab villages). During the same period, agricultural production has expanded 16-fold, more than three times the rate of the population growth.

The rabbis saw the agricultural renaissance of the land of Israel as a harbinger of the redemption (Talmud - Sanhedrin 98a):

Rabbi Abba taught: There is no more revealed redemption - no greater indication of the impending redemption - than that which the verse (Ezekiel 36:8) states: "And you, mountains of Israel, you shall give forth your branches and you shall bear your fruit for my people Israel, for they shall soon come."

Rashi explains: When the Land of Israel will give fruit bountifully, this is an indication of the impending redemption, and there is no greater indication than this.

And the land is giving its fruit bountifully. Here is a picture of the vineyards of Moshav Lachish, taken from the ruins of th biblical city of Lachish: 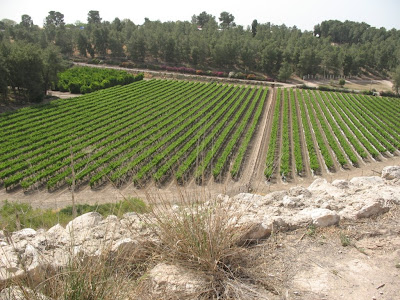 One thing to think about, after the 6 Days War, the Israeli establishment, dominated by the kibbutz priorities, looked at the liberated land only in terms of its agricultural potential. That's why the only places populated were the Golan, the Jordan Valley and Northern Sinai. There were no plans for Judea & Samaria. There was no appreciation for the historical nor security value of the Land.