The "Israel Post" is a free paper published by the Jerusalem Post Group. This was their front page this morning: 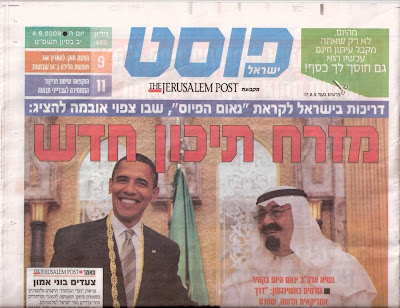 I wonder: Doesn't the editor have any sense of shame?

"Tension in Israel in Before the "Placation Speach" in Which Obama is Expected to Present:
The New Middle East

Unfortunately, those of us who live here remember when the phrase "The New Middle East" was coined and what those who coined it brought us: Death and terror. We are not impressed by photographs of grinning American Presidents and Arab smiling despots. Shimon Peres' "New Middle East", in which he gave Arafat and his henchmen weapons and territory is much, much worse than "The Old Middle East".

What is the moral level of those that are promoting the latest false Messiah? Check out the special SMS number that they advertise on the back page. I won't elaborate.

Now that the speech is history it is interesting to note the different reactions in the jblogosphere here and here.

Update: Another related post. And yet another.
Posted by Cosmic X at 6:46 PM

Comments promoting the Christian messiah will be deleted. Don't waste your time.