Larry Derfner Found Someone Willing to Publish His Drivel

Remember Larry Derfner? He's the guy that got fired from The Jerusalem Post because he wrote a blog post justifying the murder of Israelis by Arab terrorists. Well, he finally found someone who is willing to publish his drivel: 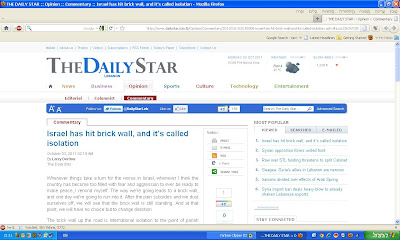 Wait a minute! Isn't Lebanon at war with Israel? Didn't the Lebanese fire thousands of rockets at Israeli civilian targets just a few years ago? I guess he finally found an publisher that agrees with his views!
Posted by Cosmic X at 9:37 PM