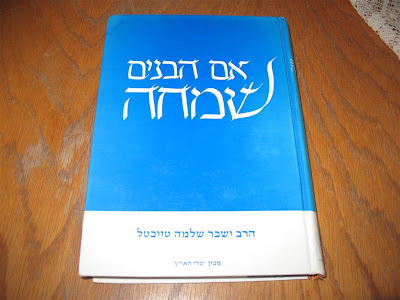 I think this is the third time around! Yeah, I really like the book. It is a must read for anyone wanting a true Torah outlook regarding the land of Israel. Here is a little of what Rabbi Berel Wein has to say about the book:

There is an enormously powerful book about the Holocaust, Orthodox Jewry, the Land of Israel, Zionism, Jewish unity and hatred and the Messianic Era, that has been in circulation for the past number of decades. Written in difficult and scholarly rabbinic Hebrew, it is called "Eim Habanim Semeichah" (The Mother of the Children is Happy), a phrase taken from Psalm 113. The author is Rabbi Yisachar Shlomo Teichtal, a noted scholar, author of three volumes of responsa, and rabbi in pre-World War II Slovakia and Hungary. Rabbi Teichtal was murdered by the Germans during the forced evacuation of Jewish and Ukrainian prisoners from Auschwitz to the Mathausen concentration camp, at the end of January, 1945. He was barely sixty years old at the time of his death.

What if you can't read "difficult and scholarly rabbinic Hebrew"? Well, you really should make an effort to learn. In the meantime the book has been translated to English, not once but twice! Rabbi Wein read the English translations and you can read his review of them.

One of the translations is available on-line at Tsel Harim web site. Not only that, Rabbi Spolter of Yad Binyamin has put up a series of lessons on the book on his blog.

The only thing left to do is learn!
Posted by Cosmic X at 6:09 PM

in this book he holds to make a medina is forbidden because of the 3 oaths...

you are joking, right?

Could you just tell me on what page he says such a thing...I'm almost finished and I do not recall seeing anything like that!

you recieved my last comment ? in ny case the rwcent daas torah post on the 6 day war has some strong comments on rav tiectal...you should respond...

Yes I did. Did you receive mine? I asked you for the source for your claim "n this book he holds to make a medina is forbidden because of the 3 oaths...".

I'm almost finished and I've found nothing to support your claim. He does not deal with creating a state explicitly. However, he seems to accept the Ramban's view regarding the mitzvah of settling the land of Israel.

Rabbi Tzvi Yehudah Kook pointed out that a careful reading of the Ramban reveals that the Ramban himself defines the mitzvah as the establishment of a state:

"The precept of conquering and settling the land is, in itself, a mitzvah prescribed by the Torah to settle the land so that it will not lay in desolation. In Judaism, it is accepted that, among the early Torah authorities, second in importance to the Rambam (Maimonides) is the Ramban (Nachmonides), one of the most outstanding sages and Kabbalists, two things which go hand in hand.

The Ramban concluded that the commandment to settle the Land of Israel is a positive commandment of the 613 mitzvot of the Torah. He based his decision on the language of the verse, "And you shall dispossess the inhabitants of the land and dwell in it" (Bamidbar, 33:53), which is stated in the language of a command. We are enjoined with two tasks: first to possess the land through conquest, and secondly, to dwell in the land (Ramban, Supplement to the "Sefer HaMitzvot" of the Rambam, Positive Commandment #4).

The Ramban clearly establishes that this land which Hashem promised our forefathers must be kept under our control, and not under the control of any other nation. This is clearly meant in a national sense, for everyone understands that ruling a land means the establishment of a state in that land. Thus the establishment of a Jewish State in the Land of Israel is a fundamental precept of the Torah! "


Thanks for pointing out the daas torah post. Those who disparage Rav Teichtal are not worth responding to.

i saw the s
ource in torah true jews parsha pearls. pI looked and saw it. i dont have the sefer now .
Look at comment nov 22 7:41 pm where he quotes rav tiectal page 149-150 in a seruous mitake and brings 6 sources against him.
He also finds mistake in r tz y kook with soyrces to back him up.
certainly worth respondig to.