A Not So Happy Sukkot

The passing away of Rav Avraham Shapira zt"l has made it very difficult for me to be happy. Sukkot is z'man simchateinu, the time of our happiness, but the tremendous loss of this great Torah scholar and righteous man has cast a shadow on the holiday.

Here's a pic that I took at the funeral. I could not get into the Beit Midrash, where the eulogies were being delivered. So I, along with many others, waited outside of the Yeshiva. A PA system was set up so we could hear the eulogies: 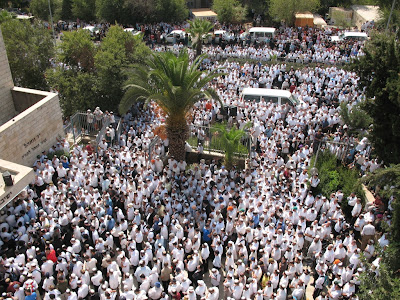 Also, check out what Tzvi has to say.

Update: Here is a pic of the side entrance to the Beit Midrash: 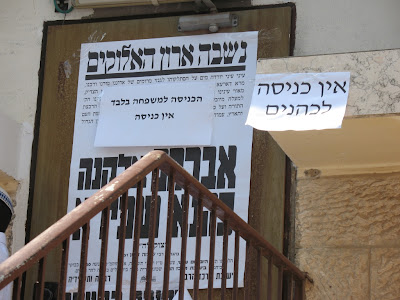 Update: Here's an article in Hebrew describing some of Rav Shapira's Hanhagot. The article mentions the very special arba minim that Rav Shapira had including a huge Yemenite etrog. I would like to add that after davening Rav shapira would let his students and others who had davenned with him notel his arba minim. I did it a few times myself.
Posted by Cosmic X at 9:15 AM

Wow! Thousands
I guess they're doing the delayed shiva.

Cos, Aish.com's got a recent piece titled "Dancing with the Rebbe" [IIRC]. You might want to check it out. (The author describes how hard it was for him to get in the spirit of Simchat Torah, with a loved one having just passed away....)

Thanks for the link. BTW, in Merkaz HaRav they canceled the annual "simchat beit hashoeva" that they hold in the yeshiva. On the other hand, there is a sign urging the students to show up for Simchat Torah.