Rabbi Shlomo Amar visited the Chicago area and Yaak was there. Rav Amar was one of the Rabbis that eulogized Rav Shapira at his funeral.
(I have a picture of Rav Amar at the funeral, but Blogger is having some technical problems. Perhaps I'll post it later.)

Update: Here it is! Rav Amar with one of his rabbis, Rav Rosental from Haifa: 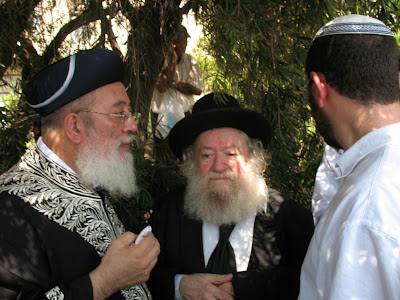 I heard the following story recently about Rav Amar:

Rav Amar expressed his displeasure with the student and told him that although he does know much Torah, he has not reached the level where that blessing can be said on him. He added that there are only two people in the generation that are on that level: HaRav Avraham Shapira (who recently passed away) and HaRav Ovadiah Yosef (sheyibadel lechayim arukim).