As captured by the cosmic camera at a recent wedding: 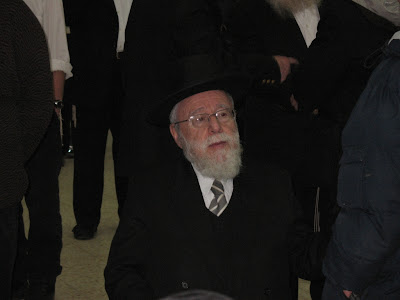 Some info from Wikipedia:

Dov Lior (Hebrew: דב ליאור‎, born 1933) is the Chief Rabbi of Hebron and Kiryat Arba in the southern West Bank. He is also the Head of a Yeshiva in Kiryat Arba,[1] and also heads the "Council of Rabbis of Judea and Samaria".

He was born to a Belz hasidic family, son to Moshe Leibland in Breslau, Galicia. He attempted to board the Exodus, eventually arriving on the Negba a few weeks before the establishment of the State of Israel, where he changed his surname to the Hebrew Lior. In Israel he first studied at the Bnei Akiva Kfar HaRoeh high school yeshiva, and then at Rabbi Zvi Yehuda Kook's Mercaz haRav yeshiva, where owing to Lior's being an orphan, the Rabbi treated him like a son. Lior was married in 5720 to Bitya, but his wife died of cancer in 5748; he remarried in 5736 to Esther, widow of Rabbi Ephraim Shahor. Lior has 11 children, 55 grandchildren, and two great-grandchildren.