I just took a night stroll through the Kiryat Moshe of Jerusalem and I saw this: 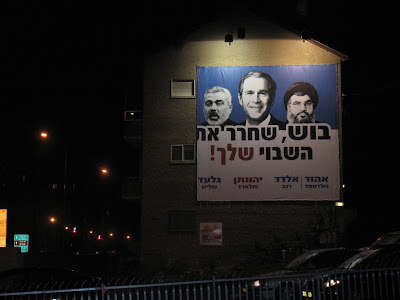 I've already stated many times that the continued incarceration of Pollard is a stain on "the land of the free and the home of the brave." Pollard is in jail because he is a Jew, and not because of any crime that he committed. Bush did not put him in jail,but he has the power to set him free. As long as he doesn't, he is in some pretty bad company.

Yosef's plea was sent along with a letter from Pollard's wife Esther, asking Bush to pardon her husband, who has been incarcerated for 22 years.