It's Still Snowing in Jerusalem

I tried going to work today. The usually traffic laden streets of Givat Shaul in Jerusalem were almost empty. The palm trees on Kanfei Nesharim Street received a white coating: 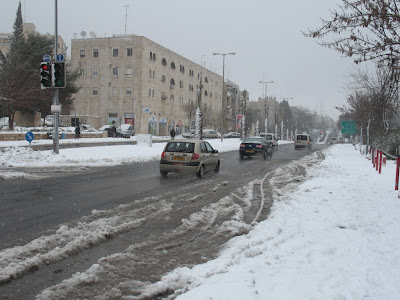 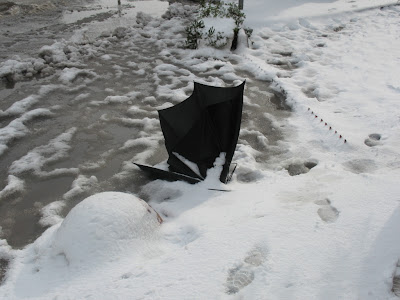 But the last rainstorm has not been without its victims. If one walks around Jerusalem, the victims can be seen every so often abandoned and lying on the ground near the sidewalks. I’m not talking about the homeless. I'm talking about the umbrellas that could not stand up to the Israeli mountain winds. I do a lot of walking and I usually have to replace my umbrella every one to two years. You walk down the street with the top of the umbrella pointed head on into the wind. Then of a sudden the wind changes direction and comes under the umbrella. It would be nice if at that moment you would lifted up into the air and spirited across the puddles like Mary Poppins, but that just does not happen. The untimely gust of wind turns your umbrella inside out. The average umbrella will survive this trauma several times, but sooner or later the fabric will tear and the arms will bend. It is not suave to walk around Jerusalem carrying an umbrella that looks like a television antenna. Of course this is not an excuse to litter. I guess the people who threw down their umbrellas were too worried about getting wet to find a dumpster to throw their umbrella into.

It has been said, “If you build a better mousetrap, the whole world will beat a path to your door.” Who will build the better umbrella that can handle Jerusalem’s winds?

Snow clouds cover a section of the Jerusalem Forest: 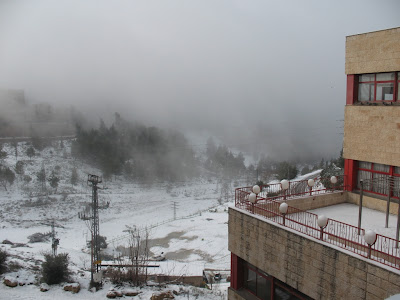 Did I mention that that the office building where I work was closed?
Posted by Cosmic X at 9:50 AM

You walked for nothing? Or just to take pictures?