One may agree or disagree with the book Torat HaMelech. But before deciding which side you are on, it is a good idea to read the book! 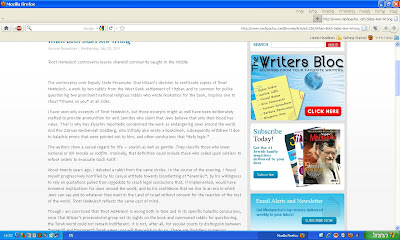 In Mishpacha, journalist Yonoson "Jonathan" Rosenblum weighs in on the Torat HaMelech controversy. Mr. Rosenblum admits that he did not read Torat HaMelech, is aware that the excerpts he saw may have been "deliberately crafted to provide ammunition for anti-Semites", and in spite of this offers us his opinion about the book:


When Both Sides Are Wrong

The controversy over Deputy State Prosecutor Shai Nitzan’s decision to confiscate copies of Torat HaMelech, a work by two rabbis from the West Bank settlement of Yitzhar, and to summon for police questioning two prominent national religious rabbis who wrote haskamos for the book, inspires one to shout “Shame on you” at all sides.

I have seen only excerpts of Torat HaMelech, but those excerpts might as well have been deliberately crafted to provide ammunition for anti-Semites who claim that Jews believe that only their blood has value. That is why Rav Elyashiv reportedly condemned the work as endangering Jews around the world. And Rav Zalman Nechemiah Goldberg, who initially also wrote a haskamah, subsequently withdrew it due to halachic errors that were pointed out to him, and other conclusions that “defy logic.”

The authors show a casual regard for life — Jewish as well as gentile. They classify those who lower national or IDF morale as rodfim. Ironically, that definition could include those who called upon soldiers to refuse orders to evacuate Gush Katif.

About twenty years ago, I debated a rabbi from the same circles. In the course of the evening, I found myself progressively horrified by his casual attitude towards bloodletting of “enemies”; by his willingness to rely on quotations pulled from aggadata to reach legal conclusions that, if implemented, would have immense implications for Jews around the world; and by his confidence that we live in an era in which Jews can say and do whatever they want in the Land of Israel without concern for the reaction of the rest of the world. Torat HaMelech reflects the same cast of mind.

Though I am convinced that Torat HaMelech is wrong both in tone and in its specific halachic conclusions, once Shai Nitzan’s prosecutorial group set its sights on the book and summoned rabbis for questioning, the Torah world could not remain indifferent.

As I read Mr. Rosenblum's article, I was "progressively horrified" by the low standard of journalism displayed. I can only say, "Shame on you" Mr. Rosenblum for commenting on the book without reading it first. One should not put the peh (mouth) before the ayin (eye). His article is barely a league above the shrill reporting of the Israeli MSM. I am quite disappointed. I must also add that the expulsion of Jews from the Gaza Strip was indeed carried out by soldiers. However, this immoral action of a people's army against its own citizens was not carried out in the framework of war and has nothing to do with the book "Torat HaMelech".

On the other had Rabbi Shlomo Riskin apparently did read the book and he has something to say about it:

What was the alleged “transgression” for which Rabbi Lior was being remanded? He had joined three other recognized Torah personalities in endorsing a halachic treatise called Torat Hamelech (Prescriptive Directives of the King), written by Rabbis Yitzhak Shapira and Yosef Elitzur. The suspicion was that the book, purportedly expressing a lenient attitude toward murdering gentiles, was inciting against minorities in Israel. Since a significant verse in Masei deals with an important subject of the book, I am dedicating this Torah commentary to the issue.

Let me state at the outset that at no time do the authors of Torat Hamelech permit the killing of innocent gentiles, except in the heat of battle and in order to save innocent Jews. This is no different than the American aerial bombings of Afghanistan; although in the Israeli army our soldiers go house to house in pursuit of terrorists and arms caches, despite the inevitable loss of our own young men as a consequence.

He goes on to state what he does not like about the book. In conclusion he tells us:

Despite my critique, there is nothing in Torat Hamelech which can be considered a message of incitement to harm Arab neighbors who are not in a war against us, and there was no justification for calling Rabbi Lior to a police station for questioning.

Sorry Rabbi Raskin, there is a 'justification.'
The Israeli government is afraid of everything and everybody.