I think that Chief of Staff Gantz has made a major error here:


IDF Chief of Staff Benny Gantz has decided to remove Lt. Col. Shalom Eisner from his comman position following the media storm over an edited video showing him using force to restrain a protester.

Lt. Col. Eisner will not be allowed to perform any duties as a commander for two years. Military sources told Arutz Sheva that Lt. Gen. Gantz made his decision after consulting with the Central Command and the Ground Forces commander.

The IDF did not eject him from the armed forces, and his rank was not changed.

Lt. Col. Eisner was the commander of the Jordan Valley Battalion and was caught on film by International Solidarity Movement activists, who blocked the only highway linking the southern and northern communities near Israel’s border.

He shoved his rifle butt in the face of a Danish activist who had broken Eisner's finger while the activist was beating him with a stick during a two-hour confrontation, which the ISM video did not show.

Lt. Gen. Gantz’s decision was a foregone conclusion given the unprecedented media outrage over the incident, which quickly erupted into a broadside even before a thorough investigation had begun.

Now Shalom Eisner will have more time to learn Torah. Good for him! 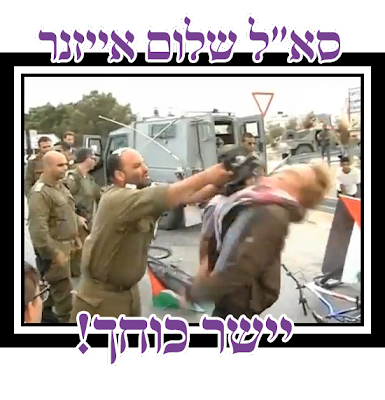