I saw this in Givat Shaul the other day: 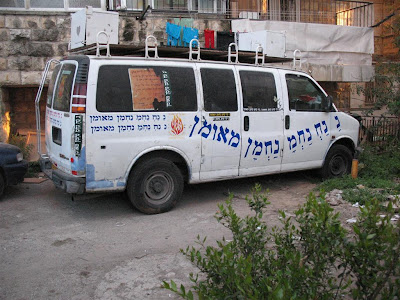 These guys even have an entry in Wikipedia:

Na Nach Nachma Nachman Meuman (Hebrew: נ נח נחמ נחמן מאומן‎) is a Hebrew language name and song used by a subgroup of Breslover Hasidim colloquially known as the Na Nachs. The complete phrase is Na Nach Nachma Nachman Me'uman. It is a kabbalistic formula based on the four Hebrew letters of the name Nachman, referring to the founder of the Breslov movement, Rebbe Nachman of Breslov, along with a reference to his burial place in Uman, Ukraine.

In 1922, Rabbi Yisroel Ber Odesser a Breslover Hasid, claimed to have received a petek (note) addressed to him from Rebbe Nachman, although the latter had died in 1810. The seventh line of this petek is signed Na Nach Nachma Nachman Meuman, which became Rabbi Odesser's personal meditation and song. Before he died, he taught this phrase to a group of devotees who formed the Na Nach movement.