His prayers were answered: 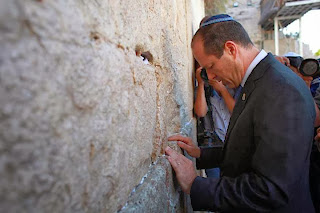 Nir Barkat was reelected. It was a tough race. Arye Deri and Avigdor Lieberman banded together to unseat Barkat. They thought that they found the man for the job: Moshe Lion. The idea was that all of the ultra-Orthodox community will unite behind the kippah-clad Lion. Many in the national religious camp would vote for him too, as he is "one of them". All that was needed was to convince enough seculars to desert Barkat, and the election would be in the bag.

The plan almost worked. However, the ultra-Orthodox public did not unite 100% for Lion. Some large Hasidic courts did not endorse him. The Bnei Torah faction even ran a candidate of their own for mayor. The final result is five more years of Barkat. Personally, I think that he has been a decent mayor and I hope that he will continue to be fair to all of the different sectors in Jerusalem.

In the council, it is interesting to note that the "United Jerusalem" faction got more mandates (2) than the Jewish Home (1). I hope that Naftali Bennett is paying attention: his attempt to force his cronies on the national religious public here was unsuccessful. I also have a feeling that many voted against the Jewish Home to protest the covenant on the national level with "Yesh Atid".

Rabbi Shmuel Orbach's Bnei Torah faction got a seat in the council which is no small feat. The Tov party, which is just a reincarnation of Po'alei Agudat Yisrael, did not get a seat. Too bad, I was rooting for them even thought I did not vote for them.