Now that I work in "gay friendly" Tel Aviv, I get to see what the homosexuals would like to do to Jerusalem: 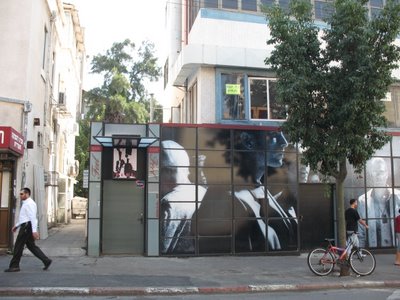 This building is smack in the middle of Tel Aviv, near the Shalom Tower. The first floor features a bar called "Feel". You can see that the facade is made up of a huge picture of men in various stages of dress (or undress). On the second floor resides the "Aram Naharayim" synagogue. Opening a bar under a synagogue is a pretty sick thing to do. Opening a homosexual bar is an outrage.

Homosexuals, please don't force yourselves upon us. We are not willing to bend over.
Posted by Cosmic X at 3:32 PM

It's my Jerusalem too!

I don't know, are they forcing you in the bar?

and its pictures of dudes, not gays blowing each other and sticking thier dicks in each others asses.

Ummmm, dudes not gays...? How exactly do you define gay?

We will not relax. Gays define themselves by their sexuality and sexual behavior and openly bait those who find their acts unnatural. That is the ONLY reason why the chose Jerusalem. I'll make you a deal... You don't march in Jerusalem and I won't daven in San Francisco. Deal?

Normally I delete comments that contain profane language. I'm leaving your comment in tact so people will see the difference between the holy and the profane.

CX,
I understand that you had more putz chopped down at your Bris than I did at mine, right? WRONG!
You're the Jewish pope, right? WRONG!
So what exactly is it that makes you think you have a right to deny me a part in the holy city of my people?
Does the Rashi on אם אשכחך ירושלים state that people who model for gay porn are exempt?
I find it humorous that an individual who boasts that the ultimate expression of Judaism is a house on a hill where animals are killed thinks that he has a part in common sense.

This guy has clearly never been to an all-you-can-eat BBQ.

surprised to see a gay movement in israel itself

orange&black's comment on the all you can eat barbeque got me
thinking this Shabbos.