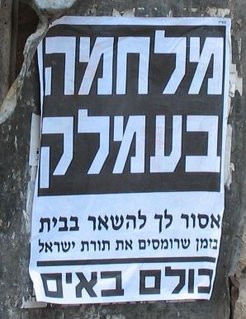 Hareidi religious Jews took to the streets once again Saturday night in massive demonstrations spreading to numerous neighborhoods in Jerusalem and elsewhere in the country.

Demonstrators had been advised by the Hareidi Rabbinical Court not to carry out demonstrations Saturday night, but rather to wait until Franco made his decision on whether to authorize the parade. The announcement by Rabbi Yitzhak Tuvia Weiss was broadcast by cars traveling through the religious neighborhoods.

Nonetheless, the streets were packed with protestors shortly after the end of Shabbat in defiance of the recommendation. Streets were blocked in the following Jerusalem neighborhoods: Meah Shearim, Geula, Givat Mordechai, Kiryat Moshe and Bayit V’gan. Some of the demonstrations escalated beyond voicing protest.

Today is the day that the police chief can save Jerusalem's honor by preserving the city's holy character:

Jerusalem Police Chief Ilan Franco will make the pivotal decision Sunday whether to permit the homosexhibitionist parade to march this Friday through the streets of the holy capital city.

I am glad you are keeping us informed on this situation.
It seems like such a powderkeg.
I hope it can be resolved without anyone being hurt.
To me, its as if they are thumbing their collective noses at Hashem. For them to march in Yerushalayim is just so awful.

I am with the Haredi on this issue !!

I'm glad that you are glad. I also hope that this ends without anyone getting hurt.