Last Thursday I went to the annual memorial gathering in honor of Rabbi Meir Kahane z"l. Rabbi Kahane wrote numerous books and articles. Some of his literary output was on sale at the entrance to the hall: 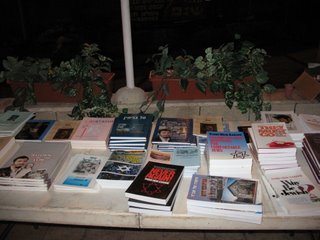 Inside the hall was full of family, students and admirers: 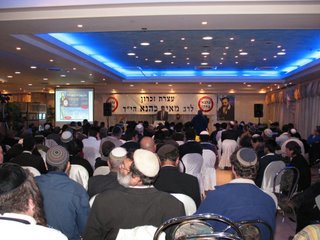 A film was shown showing how Rabbi Kahane's murder was perpetrated by the same Al Qaeda terror cell that was later to attack the World Trade Center.

Yossi Rabin encouraged the younger people to get to know Rabbi Kahane via his books.

Shmuel Cytryn declared that he is a Kachnik, that he was born a Kachnik and that he will die a Kachnik.

I admire these guys, but I do not agree with them on every issue. This being so, if Meir Kahane were alive today I rather vote for him than vote for any party currently in the Knesset. He proved to right about a lot of issues. Unfortunately, the Knesset turned our democracy into a farce by making the Kach Party illegal. They made a joke out of themselves by redefining racism. We are all suffering as a result.
Posted by Cosmic X at 10:36 AM

I agree.One can agree with his main ideas wthout agreeing with everything he said.

The left is trying to do the same thing to Lieberman now - claiming he is a racist. So far, nothing he has said has proven this.

on what issues do you disagree with the Rav?

Lieberman is actually pretty far to the left, but he's smart enough to talk a good game

Lieberman is not a racist. In my book he is just another politician that doesn't base his ideas on the Torah, making him no different from Sharon, Olmert, Netanyahu, Peres, Peretz, etc.

I don't know about the Rav himself, as he is no longer among us. However, some(?) of his followers seem to support what Yishai Schlissel did last year, which is something that I do not agree with.