I just came back from the funeral at Merkaz HaRav. This article from INN describes the scene:

The eight Jewish martyr students who were slaughtered Thursday night in a terror attack on the Merkaz HaRav Kook Yeshiva are:

The funerals began at near the main entrance to the capital, at Merkaz HaRav Kook Yeshiva, considered to be the heart of the national religious movement. The ambulances carrying the victims arrived around 10:30, making their way with difficulty through the large crowd of mourners and arousing new waves of sobbing and wailing with each arrival. Rabbi Benny Eisner, a veteran Merkaz HaRav student and teacher in the high school, led the mourners in the recital of Psalms.

The first eulogy was delivered by Rabbi Yaakov Shapira, who succeeded his late father, Rabbi Avraham Elkanah Kahana Shapira, at the helm of the yeshiva when the latter passed away just a few months ago. Rabbi Shapira spoke sobbingly of the "eight sons that we have lost in one day," and called for a "better and more believing leadership... This slaughter is a continuation of the slaughterous pogrom of 1929 in Hevron [when Arabs murdered with axes 67 Jews in their homes and synagogues]... The Land of Israel, which these eight loved so much and were so devoted for - we have to stop playing with it! We have to stop dividing it!.. Please pray for us, and for the yeshiva, that it should continue to grow and have influence..."

Rabbi Yerachmiel Weiss, head of the Merkaz high school, spoke next, in a voice breaking with emotion and tears: "G-d is just, and His ways are just... We have questions; but the questions are so difficult, so difficult... How is it possible to eulogize one Torah scholar on Rosh Chodesh Adar? But two? and three, and four, and five...?? Your ways are so hidden, Master of the Universe! ... In Adar, we increase joy - look how much joy You gathered to Heaven! They were in the midst of studying Torah, such joy, such purity... We have been left with such a hole... I just want to tell You, Master of the Universe, what great people You took: Yehonadav - he gave [nadav, in Hebrew] so much; what purity and simplicity... You took Yochai from us - he lives [chai] in G-d, what Torah study he did; even while they were setting up for the Purim party, he came to learn Torah... You took Segev Pniel of the Avichayil family - what a family, and what valour [chayil] in Torah! ... You took Yehonatan [meaning "G-d gave"] - what prayer, what Torah, what beauty... You took our dear Avraham David - just two days ago I had a long talk with him in his room - what knowledge he had, what integrity, what music he gave us with his Torah reading... and the youngest, Neriah - the candle of G-d, his light will be missing from us..."

Rabbi Mordechai Eliyahu, a former Chief Rabbi of Israel and one who has been very close to the Yeshiva and its students for decades, was unable to attend because of ill health, but his assistant Rabbi Shmuel Zaafrani read aloud his message of eulogy.

Chief Sephardic Rabbi Shlomo Amar, the Rishon LeTzion, quoted verses speaking of enemies defiling G-d's holies, and asked, "How much longer, O G-d?... Whoever could have thought that the evil would have come to the gates of the yeshiva, with such cruelty... This is a tragedy of all of Am [Nation] Yisrael; we are all crying, we are all mourning... Let us arouse to distance ourselves from all hatred and disunity, and let us increase love, brotherhood and Torah study..."

Following the concluding eulogy by Jerusalem Mayor Uri Lupoliansky, the eight families of mourners tore their shirts and recited aloud the Kaddish prayer.

At the conclusion of the eulogies and prayers, eight separate funeral processions set out for the various communities where the boys are to be buried. Yochai and Neriah will be buried in the Mt. of Olives cemetery in Jerusalem. Announcements were made regarding each funeral - where the ambulance carrying the body would be stationed and from where the bus setting out for the burial was leaving.

National Union MK Effie Eitam noted Friday morning that “whoever chose the Merkaz HaRav Yeshiva as a terrorist target knew it was the heart of national Zionism.” Virtually every religious-Zionist yeshiva in the country was founded and/or staffed by former students of the yeshiva.

Eitam, who learned at the yeshiva 30 years ago after living in the secular Ein Gev kibbutz, called the institution “the mother of all Zionist yeshivas” whose graduates serve in the IDF and have been at the forefront of development in Judea and Samaria. “The victims were murdered,” he declared, “but their hope and faith cannot be killed.”

Among the thousands of mourners at the funeral could be seen rabbis from around the country, as well as Minister Meshulam Nahari of Shas, MKs Nissan Slomiansky, Nissim Ze'ev, Ruby Rivlin, and Zevulun Orlev, and former MK Ehud Yatom. Benches were set up at the entrance to the yeshiva for the families of the victims, surrounded by the large crowd of mourners.

Here are some pics that I took. A mourning notice with the names of the victims: 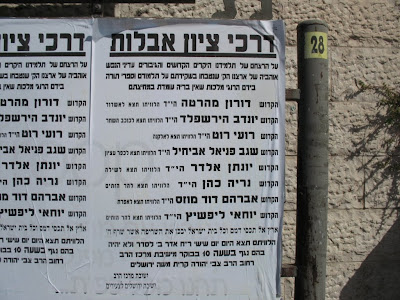 The bodies were placed in the plaza in front of the Yeshiva on benches that came from the lecture hall. The name of each victim was placed on a shtender in front of his body: 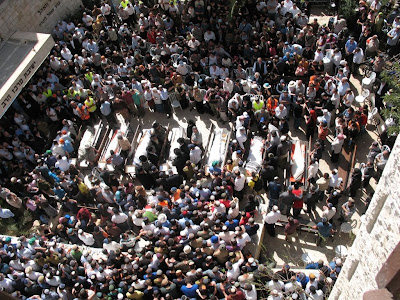 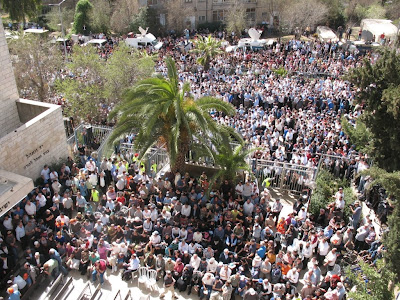 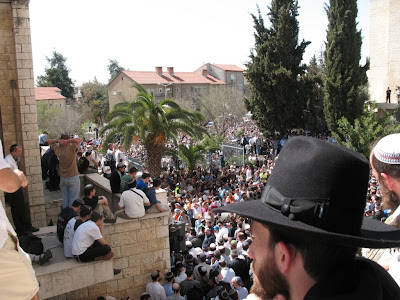 Like you, I anxiously awaited the list of victims. I used to live in Qiriyath Moshe. Yet, the martyr I knew did not come from the nieghborhood:

There Were High School Students!

Thank you for posting these pictures.

It is terrible, just terrible.