Here is What Ynetnews Won't Show You

Ynetnews recently published an article about a "gilui daat" poster. The article is a "work of art", a masterpiece of taking quotes out of context in order to make a media spin. Ynetnews did not provide the full text of the poster or even a high quality image that can be read.

Here is what Ynetnews wants to hide from you. Click on the photo below to see an enlargement that is readable. For those of you that do not understand Hebrew, I am sorry but I just do not have the time to translate this:

Here is my translation of the poster. Additions for the sake of style and understanding are included in square brackets:

The terrible situation of "For, behold, Your enemies are in an uproar, and they that hate You have lifted up the head"[Psalms Chapter 83] is a direct result of the lack of a fit government.

A fit Jewish government needs to act according to the fundamental rule that is that is adjudicated in the Jewish Code of Law (OC 329) that it is forbidden to compromise with gentiles that are coming to harm Jews or Jewish property, since every [act of] weakness invites additional violence and murderousness, as the Lubavitcher Rabbi vehemently warned.

The current ruling establishment in the land of Israel is walking on a path of increasing compromise to the Arab enemy, to those inside [the land of Israel] and to those outside, and in this way it is nourishing and inflating in their midst the illusion that they will be able to destroy the existence of Jews in the Holy Land, God forbid. Moreover, not only are they acting in weakness and compromise with regards to the Arab enemy, they also say that he [the enemy] is right, and thus give him more substantive power to harm us, God forbid. And what is most severe from all [of the above], they even supply weapons to the enemy that is directed towards the spilling the blood of Jews.

True Jewish leadership knows how to send the nation to war with the recognition of the justice of a war against the enemies of Israel, that they are the enemies of God that are coming to harm "Israel, my first born"[Exodus 4:22] and to steal the inheritance of God.

When going to war ,the Priest Anointed for War [see Deuteronomy Chapter 20] turns to the nation and infuses every soldier with the awareness that he is going to fight against enemies and not brothers. Therefore it is forbidden to have mercy or pity on the other side. Rather one must act out of the "holy strengths" of hating evil. Everyone is required to describe to himself what the enemy devises to do to us and to apply [this] to him "measure for measure". "Don't have mercy on them for they will not have mercy on you."

And in practice: First and foremost it is incumbent upon all of us to devote ourselves to the main and fundamental repair and to act for the establishment of a fit Jewish leadership. This in addition to blessed local actions, and in addition to the necessary repair that starts in everyone's private home: to cease to employ and to provide for the Arab enemies and to switch over to "Hebrew labor" and trade with Jews.

And may we merit to "the Jews gathered themselves together in their cities... to lay hand on such as sought their hurt"[Esther Chapter 9]. In those days at this time.

The public is invited to hear how fit Jewish leadership speaks

that will take place on 6 Adar Beit (after the seven days of mourning) at 20:00 in Heftzadi Hall (21 Yirmiyahu St.) Romema Jerusalem 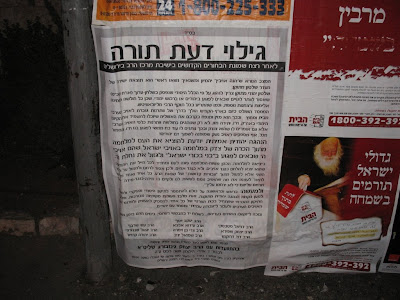