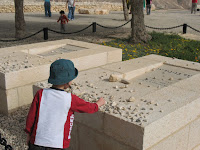 Not really. This isn't a live blog. The X family was down south during the Passover holiday and one of the places we visited was Ben Gurion's tomb.

Why is it that Jews place stones on tombs?:

A very early reference to this custom is found in a commentary to the Shulchan Aruch, written by Rav Yehuda Ashkenazi (early 1700s) called the B'er Heitev. He quotes the Maharash, who explains that the custom of placing stones or tufts of grass on the grave is for the honor of the deceased person by marking the fact that his grave has been visited.

I must admit that I am not a big Ben Gurion fan. But I won't go into that now. Everyone has their good points and bad points. He's no longer with us and I admit that I also placed a stone on his grave, as did other members of the X family.

The "old man" as he was affectionately called sure chose a nice place to be buried. From his grave site there is this wonderful view of Nachal Zin: 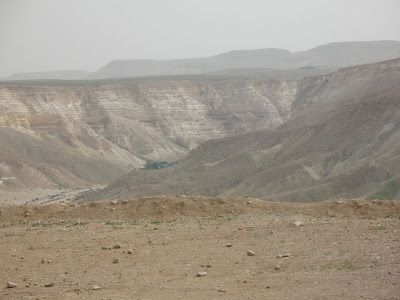 This area of the country is simply beautiful. We didn't have enough time to really explore it. I hope to back there in the future.
Posted by Cosmic X at 3:50 PM