Druckman Letter to Barkat: Far From Being an Endorsement

Some Israeli media outlets are publicizing that Rabbi Chaim Druckman supports Nir Barkat in the Jerusalem mayoral race. However a careful read of the letter that Druckman wrote for Barkat tells an entirely different story: 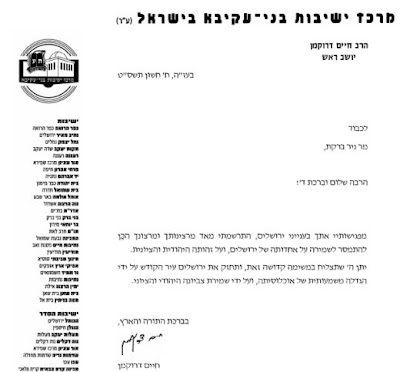 
Much peace and God's blessing!

From my meetings with you concerning Jerusalem, I was very impressed with your seriousness and your sincere desire to devote yourself to guarding the unity of Jerusalem and its Jewish and Zionist identity.

May God help you succeed in this holy task by increasing its population, and guarding its Jewish and Zionist identity.

With the blessing of the Torah and the Land,

The honest reader will see that there is no endorsement here. Rabbi Druckman doesn't even mention the mayoral race. He is simply blessing that Barkat will succeed in guarding the unity, Jewishness, and Zionist identity of Jerusalem.

Let's hope that he does so, but not from the mayor's seat.
Posted by Cosmic X at 6:18 PM

Here's an interesting artcile about the mayor debates which include a good overview of each candidates views. http://www.israelnationalnews.com/News/News.aspx/128179