I've finally finished reading Torat HaMelech Part 1, cover to cover, all 230 pages with the footnotes. In an earlier post I suggested that I would write a review of the book. So here it is: 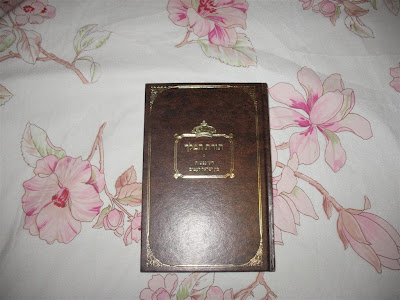 Torat HaMelech is the book that the Torah observant soldier has been waiting for. The books for religious soldiers up until now dealt for the most part with the private miztvah observance of the soldier: how to keep the Sabbath, dietary laws, etc. in the army. Finally, someone has taken the responsibility to clarify what is proper in time of war and what is not, relying on Torah sources and not from what he or she imagines to be "moral". We learn our morals from the Torah, and not from the Sabbath desecrating judges of the Israeli High Court of Justice.

The pedagogical technique of the book is fantastic. The authors take the reader step by step, teaching him the foundations of these laws before moving on to more complex situations. Everything they write is backed up by Rabbinic sources, which they quote in their original language and later explain in modern day Hebrew. This gives the reader the feeling that he is listening to a lecture. At the end of the book is a three page summary of the book's six chapters. You really feel that the authors are doing everything they can to make the deep halachic inquiries understandable to the average religious Jew who has a background in Jewish learning.

It is no secret that the book caused an uproar among the ignorant and among the learned as well. Personally, I could not care less what the ignoramuses have to say. They lack the tools to understand such a work. What's more, their desire to promote their warped version of reality often compromises any intellectual integrity they might have had. On the other hand, I am very interested in what the Rabbis have to say about the book. The gauntlet has been thrown down! Any Torah Scholar that does not agree with the book will have to pick up the gauntlet and show where the authors are mistaken, using Torah sources. Blanket condemnations that are not backed up with appropriate references to Rabbinic literature will not be accepted!

The relevance of the book is obvious. Immoral people spread their mistaken notions of morality through the mass media. Combat soldiers are sent to jail for using "nohal shachen", which Torat HaMelech teaches us is a completely acceptable practice according to the Torah. The IDF endangers the lives of its soldiers in order to protect the lives of the enemy's civilians, a practice which is against Jewish Law and common sense.

Thanks for the review, I suspected as much. Where can I get a copy in translation?

Point of Information: the Catholic Church also published extensively treatise under the rubric of justifications for war and I don't see the Israeli government prosecuting priests for inciting actions as are being prosecuted agasint Rabbi Lior.

You are welcome. I don't think that the book has been translated into English.

This is not the book that the soldier has been waiting for. Soldiers should do what their commander tells them (except in very extreme situations). Halachot of war are relevant to policymakers, not foot soldiers.

What are these "very extreme situations"?

For the soldier that is faithful to the Torah, anything that is against halacha is a very "extreme situation".

Therefore, it is very important to know what the halacha has to say. The laws of God are more important than the laws of man.